I'll admit it, I was pretty hard on the whole process the Plain Dealer used to crown the best pizza in Cleveland. Regardless of what I think, in the end the judges got it right. Angelo's has one of the best all around pizzas in the city. The one big surprise for me was that P Jay's Pizza in Parma made it to the final four.

Interestingly enough, a month or two before all of this Plain Dealer stuff started, I was talking to the repairman who was fixing my furnace (Len's Heating and Cooling, great company btw). He noticed I was wearing an Antonio's Pizza shirt and asked if I'd ever had P Jay's. When I told him no, his eyes immediately lit up. "Oh man, you've gotta go there. That is the best pizza! Antonio's is good, but this is better." I told him that I ought to throw his ass out of my house for saying such a thing. Since he was much bigger than me and had just fixed my furnace, I let him slide. But next time.....

Fast forward to last night, I had just dropped my wife off in Seven Hills and was on the hunt for dinner. Since I was flying solo it was completely my choice, and when it's up to me - it's pizza. I had looked into P Jay's once before and realized that for the most part it's a carryout and delivery type place. (They have a few seats and a table but not really "dine in".

As I was leaving Seven Hills I placed an order for a 12" pepperoni and sausage. Having read that it was cash only I made sure that I was stocked up with plenty o' green.

The shop itself is actually on Ridge road, but is very near St. Charles Borromeo (used to bust the 5:30 Sunday mass back in my west side days), and the parking is in back. The interior is pretty sparse with a conveyor style oven placed right in the middle of the room.

The middle aged guy (I'm assuming he was the owner), was extremely friendly and gave me the rundown on the coupons and frequent customer offers. I had no complaints with their service, in fact I'd say it was great. I had my pie and was headed home. *I live 25 minutes away and can say that these pies travel well.*

Even though it did smell very good, I was able to keep from sneaking a piece before I got home. When I opened the box the first thing I noticed was the enormous hunks of sausage. If ever there was a pizza made by men, for men - this was it. Judging by the enormity of the repairman that alerted me to this place, I figured it was going to be a hearty pizza. 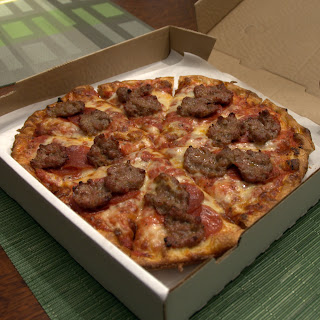 P Jay's SAUSAGE and pepperoni
I would describe P Jay's as a pan pizza with a thickness very similar to Antonio's. The crust is a little greasy but not necessarily in a bad way. The bottom actually has this nice brown crispiness to it that I thought really tasted good.

The sauce (like Antonio's) has a very herbaceous flavor to it. With the pizza here in Cleveland, I think you can taste the difference between exceptional and middle of the road. You can tell that these guys take pride in the sauce. This isn't some puree out of a can type nonsense. This is something they take time to make.

Judging by the slight greasiness, I'm going to guess he's using straight provolone or some type of mix that is close to it. As best I can tell, they aren't wasting their time with part skim mozzarella or anything like that. I'm actually surprised more places here don't use provolone. When I'm on the east coast I see it quite a bit, not shredded but whole slices of it. A full fat cheese is going to get greasy, that's just the way it is. And it tastes so damn good....

The toppings threw me off a little bit. The sausage is awesome. As you can see in the picture there are huge chunks of it. Carnivalicious. There's a small bit of spice to it, but nothing that would deter a "spice wimp" like my wife from eating it. The only letdown was the pepperoni; thin little red disks that didn't really add a whole lot of flavor. Next time I'd probably just get a sausage.

I've been to some of the other contenders from the PD pizza challenge and P Jay's is definitely worthy of the accolades. I loved the pizza here. If Antonio's was going to get beat by anyone these guys would be it. There's also a pierogi pizza that I have no desire to try, but is very popular. In fact, I've been to pizza shops on both coasts that sell pizzas with potato slices on them, so it's certainly not that much of a stretch.

If you get a chance, pick something up here. If you go to their website they have what basically equates to buying a pizza and getting the second at half price type coupons. Even at full price I think P Jay's represents a fantastic value.