Last night I told you that I was going to be laying out my list of underdogs, dark horses, mudders - whatever you want to call them. These are the NEO eateries I think are flying so low under the radar that they could slip past the Pakistani air defense and kill Osama bin Laden.

I'm starting with Fat Casual BBQ for a couple of reasons:.

First, I think their name is gaining wider and wider recognition - the days of underdog status are dwindling.

Second, one of the owners (Walter Hyde) is my brother-in-law. Listen, I know what he and his partner Scott Slagle are capable of, but I didn't want to make it sound like I was pimping them straight out of the box because of my personal relationship with them.

Fat Casual sits about a minute off of I-271, in Macedonia. This spartan barbecue joint (and I do mean spartan) reminds me of most any of the places you find driving through the South. (That would be a good thing.) As you walk through the door, the first thing you see is the front counter. You order you food. They plate it or pack it up. You go eat it.

There are no servers here, which is the way I actually prefer it). They get in the way. It's smoked meat people. What in the hell do I need a server for?

Fat Casual pretty much runs the gamut on their meat offerings. If you've got people who want leaner, lighter type fare, they've got smoked chicken and turkey available. While I can't say I've had the chicken, I can say the sliced turkey breast is very tender and juicy. Here's a really good link describing a smoked fried chicken they've been experimenting with. 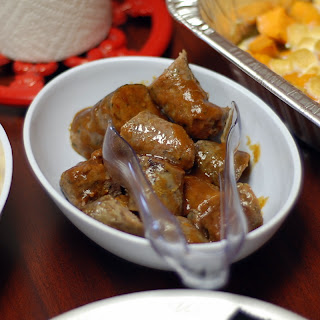 
If you happen to be like most barbecue aficionados you probably aren't there for the poultry. I think above all else they do one hell of a job with their beef. More specifically, I think the beef sausage and corned beef are absolute money. The sausage has a surprisingly good texture and spice to it that is very reminiscent of something you'd expect with pork. Another plus to these addictive little suckers is that although they may look like hell as leftovers, they reheat extremely well.

I am also a huge fan of their smoked corned beef. Sometime around St. Patrick's I stopped in and they let me try their rendition of this Irish staple. All I can say is that you have to try it. The smoke is not really assertive, but somehow creates a perfect marriage with the cured beef. The crew here has also been offering up smoked prime rib on Friday nights (read this review). Right now the plan is to do it just for May, but as with anything if it proves to be popular it could find a permanent spot on the menu.

For whatever reason, the people of Cleveland seem to equate barbecue to pork ribs. As I go to more and more places around the country, I've come to the realization that ribs are a personal preference. I like to think of it more like pizza - there's good (which is most places) and then there's bad (which you can read about here). The ribs here are good. I have a tendency to be more concerned with how well they're cooked. Give me a nice tender rib with the slightest amount of sauce and I'm a happy camper. Scott and Walt serve theirs up dry (as in no sauce) giving you the option to "sauce the hell out them" if you so choose. However you like your ribs know that these are cooked long enough to where they're tender, but not overcooked to where they completely fall off the bone.

Whatever you decide on you can't really go wrong. The prices here are better than anything you'll find in the city, while offering food that is at the very least as good, but more than likely better than anything your going to find elsewhere in Cleveland. I tend to be more of barbecue for lunch kind of person, but if you visit make sure to bring along your favorite beer to wash it all down. BYO rules the day here, and probably will for a while since liquor licenses are in such short supply in these parts.

Fat Casual is cranking out monster food at very reasonable prices. If you stop in soon you'll be able to tell everyone years from now that you knew about this place back when they were an underdog. (Okay, maybe a slightly overgrown underdog that should have pretty good odds in his next race.)