A while back my sisters and I decided we would get together for dinner last Saturday night. My mother was originally going to watch the kids but she had a really hectic week so we had to come up with plan B.

I will eat pizza on any day, any place, and for any meal. Since both of my sisters live on the west side and we had 2 kids under the age of 2½, we had limited options.

We decided to each pick up one west side pizza a piece. We picked up an Angelo’s deluxe pizza, my sister Bridget got a Mozzerella Basil pizza from Sweet Basil in Westlake, and my sister Darcy who was hosting got a pepperoni pizza from Danny Boy’s in North Olmsted.

My favorite on the evening was from Angelo’s in Lakewood. It’s a pretty sweet sauce, but works really well with the amount of cheese they use as well as the buttery crust. I don’t think it’s one of those pizzas that I would eat with any regularity. I don’t like it as much as Antonio’s or Geraci’s, but it is tasty.

My next favorite was probably Sweet Basil. This is the closest thing I’ve had to true New York style pizza in Cleveland. I could tell that it was the real deal as soon as I saw the really wide pizza box. A very thin crust under the cheese with a uniform Neapolitan edge, Sweet Basil has a unique product, very foldable and every bit as good as a typical east coast fare. My only complaint is that the pizza does not travel well. The humidity in the box wreaks havoc on the pie. Of the three this is the one I would most want to try again, only next time I would eat at the restaurant fresh out of the oven.

Update:
I've eaten in the actual restaurant it is is THE New York Style pizza in Cleveland. This is a great place for families, couples, and everything in between. Owner Dan Joyce is doing a fabulous job out here in Westlake. 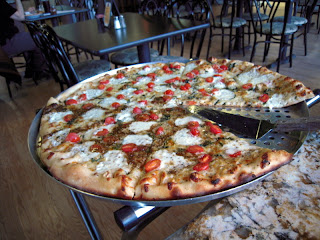 The Grapes of Wrath Pizza (awesome)

Danny Boy’s was probably my least favorite sampling of the night. I just thought it was an average pizza. Part of the problem was that it was being eaten along side two very good contenders. Would I turn my nose up at it if someone served it a party? No. It’s better than Papa John’s or Pizza Hut. I just didn’t think it was a great as some people have made it out to be.

I actually thought this was probably more fun than going out to eat. I had my first taste of GLB’s Christmas Ale for the year, that hit the spot! For whatever reason, this year’s incarnation seems a little spicier than in years past. A definite winner.
Posted by Dine O Mite! at 11:28 PM