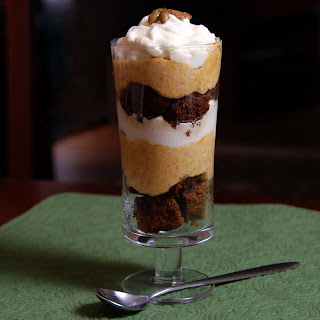 One of my quests is to try some nontraditional desserts using some of the more typical Thanksgiving dessert ingredients. The now defunct Gourmet magazine provided the template for a Pumpkin Gingerbread Trifle.

There's really only three components to it: Pumpkin mousse, Whipped Cream, and Gingerbread.

For the Gingerbread I chose to not use the recipe from the Nov '09 Gourmet, but a Gourmet from 2000. This Gramercy Tavern Gingerbread is moist as hell. You can actually see some of the stickiness hitting the side of the glass in the picture above. If you take anything from this post, it's to try this recipe, this is one for the arsenal. I made this on Saturday and had a slew of the cubes left over and these were still as moist on Wednesday as the day I made them on Saturday. Instead of putting this in a bundt cake pan I made it in a 13x9 pan for 50 minutes.

Topping it off are some candied pepitas. These didn't really turn out as good as I would have liked. I'll be trying some other things to top this off.

I think I'm definitely on the right track with this one. If I can iron out the topping I think we'll have one of our Thanksgiving desserts.

An Evening with Thomas Keller and Ad Hoc

I love cookbooks. Last week I ordered Ad Hoc at Home by Thomas Keller and Johnny's Iuzzini's Dessert Fourplay. I was pretty excited when they arrived today in the mail. I had actually looked at both of these books a couple of weekends before and thought they were certainly worth buying.

Quite honestly, I'm not a chef. I don't pretend to be, which would explain why I had chose not to get the French Laundry cookbook. It's not that I don't think I could do the recipes. I can. The problem is that it takes a lot more time for me to do it, than it would for someone with better skills and equipment. Ad Hoc at home is the antithesis of The French Laundry. The majority of the recipes have minimal ingredients with way fewer processes than TFL. 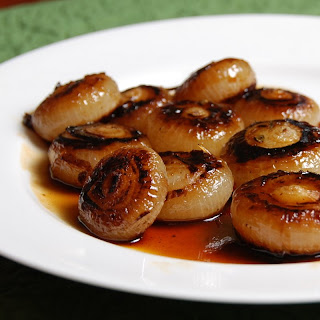 
With a bowl of cipollini onions from Snake Hill Farm sitting on the counter, I figured there was no time like the present to test drive one of Keller's recipes. An easy to follow recipe with just six ingredients, the Honey Glazed Cipollinis were delicious.

If you haven't seen this book, you've got to take a look. Not only are the recipes relatively easy, but there's a lot of "how to" info also included.

My All Star Cleveland Fall Lineup

To say that the last couple of months have been busy is an understatement. The steady amount of travel coupled with absolutely mind bending projects, has left me with very little time or energy to update this blog.

Thankfully, we aren’t quite at the George Jetson era where you take a pill for dinner to satiate your appetite. I still have to, and thankfully so, eat real food. I can’t think of a better way to unwind mentally than sitting down at a favorite eatery and enjoying fall’s bounty. These are the best things I’ve eaten in the last couple of months.

The serving size was huge, the chipotle cream (notice I didn’t say chi-poltee) was so good I would have taken a bath in it. I don’t know who does their bread, but it’s the best focaccia I’ve ever had (and I don’t even really like focaccia). There’s a salt on top of it that makes it absolutely addictive.

Chef Bennet has done it again. I’m not a big salad guy, so when I see something out of the ordinary like this I have to order just out of curiosity. The apples are shaved really thin and create a voluminous pile of “salad”. Drizzled on top of the salad is the vinaigrette with a generous amount of bacon and candied walnuts sprinkled on top. Usually I look forward to the bacon and candied nuts, but the cheddar and apples steal the show. If you go, you have to try this before the season’s over.

I asked our server Mark (who’s one of my favorites in the city), what the deal was with this, and he said he couldn’t really explain it that well, but it’s just really, really good. I’m always game for some that’s just really good, so if it’s two “reallys” I had to give it a try.
“Really really” doesn’t do this dish justice.

Once again my impeccable food karma didn’t let me down. The half portion is pretty big (half a tail), there’s no way I could have tamped a whole one down my esophagus. The buttery lobster meat is topped with this crispy mustard topping, that when mixed together with the lobster meat, is like a savory edible type of crack. I could have done without the potato cake and just had another helping of the spinach. The saltiness of the bacon, , (which also has crack-like qualities) is mixed with the spinach. As a side note: Chef Doug Katz said they smoke the bacon themselves in the tandoor oven. He said we were more than welcome to purchase some if we wanted to. Good to know. If you go, don’t miss this one.

For the life of me I can’t remember the name of their pastry chef, but as far as I’m concerned she’s right there with Kate O’Donnell at Moxie. Whoever she is, this girl has come up with a mean lineup of desserts.

You’re probably thinking, “S’mores? Been there. Done that.” Unless you’ve been here and eaten this – then you haven’t.

Served deconstructed, this dessert is separated along a narrow plate. The graham crackers are actually these thin shortbread cookies that, when topped with the fudgy cake and other components, make a very rich and delicious bite. A glass of milk might actually come in handy. We had always wavered a little bit on dessert when coming here in the past, but the desserts this summer and fall have been very interesting.

Although I’ve been busy we typically get a chance to go out once or twice a week. We’re coming up on that part of the year where all there really is to do is cook and eat. But that’s not a bad thing, is it?

Ask most Clevelanders if they like autumn, and I would venture to say that most would say they do. Many of the people would probably say it’s their favorite time of year. If we could figure out a way to go from the falling leaves straight into spring (which around here is “winter jr.), the city’s population would probably double.

With the onslaught of winter headed straight at us in the next month, what’s a Clevelander to do?

When I think of cold and snow, I think comfort food. Is there anything more Cleveland than sweater clad patrons with heavy coats slung over the back of their chairs, on a perpetually wet floor covered in a mixture of melted slush and salt, drinking beer and feasting on a plate of steak and mashed potatoes? If we really want to capture the mental picture, this scene takes place in one of the many old narrow bar spaces that exist in the old neighborhoods around our city.

While, thankfully, the brisk winter wind hasn’t arrived yet, the pall of grey is still attempting to overtake the sun, and the snow is still a little ways off, our scene fits Bistro 185 like a well worn glove.

We made the mistake of winding our way north through the back streets to get this small east side restaurant. Just a word of advice: unless you live in South Euclid or nearby, just take the highway. Traffic lights absolutely kick your ass the whole way there.

With sleek neon signage glowing in the dwindling daylight, we passed up the outdoor patio and headed into the cozy interior. The first thing that strikes you at the door is the hominess of the setting. The attire is casual and the crowd is diverse. The acoustics are such that there’s a privacy of conversation, but not so loud that you have to shout.

Since we had been here before, we pretty much knew what to expect. The menu is largely on the heavier side (we are after all, Clevelanders). Heavy doesn’t bother me, but Regina wanted the only thing they were out of – Yellowtail Snapper. For those of you keeping score, they get a gold star for offering sustainable fish. She finally settled on the Roasted Figs stuffed with Goat Cheese (monstrous portions), and the Smoked Duck Breast on Potato Pancakes with Raspberry Chipotle Drizzle. She liked the duck a lot, the figs she wasn’t as thrilled with. I think she was expecting smaller figs with less cheese. The duck breast which was her quasi-entrée was spot on.

Since I had behaved myself (dietarly speaking) during the week; I opted to reward myself with a 16 ounce Pepper Crusted Steak. Like everything else I’ve ever had here, it was a good solid dish of food.

Bistro 185 gets it. If you had to draw up a restaurant to fit the neighborhood this would be it. The menu is a continuous beat of Cleveland favorites from Chicken Paprikash to Lamb Shanks to Pan Roasted Walleye. The portions are big enough to satisfy most appetites. This is a restaurant your kids, parents, and grandparents would feel comfortable while finding something on the menu that they love. In terms of price it may well be the best value on the east side, if not the entire city. We had a $50 gift certificate and struggled to make the minimum. One more piece of advice: make reservations especially on the weekends (it is beloved after all).

If there’s a restaurant that captures the essence of what it means to eat in Cleveland, I think Bistro 185 is it.

For years we had talked about making ice cream. It just seemed to be one of those things that we had always talked about doing, but never got around to actually doing. I think a big part of it had to do with the translation of the kitchen gadgetry for the home cook. I have never had cappuccino, from a machine made for the home, which tasted remotely close to the stuff I obsessively consumed in Italy. My fear was without spending a mint, homemade ice cream was going to be in the same category.

The fears were laid to rest when we borrowed my brother-in-law’s ice cream maker and tried a recipe out of Fine Cooking. After screwing up one batch of custard, my second try proved successful. It was official; with a good recipe you can make not only edible, but downright good ice cream out of a home ice cream maker.

Besides the ice cream maker, Dave Lebovitz’s “The Perfect Scoop” is an absolute must for the aspiring home ice cream creator. The recipes are well written and a great bases from which to create more creative flavors.

Most ice cream recipes (especially the custard based ones) can be a little involved, but this Peanut Butter Ice Cream is as easy as it gets. 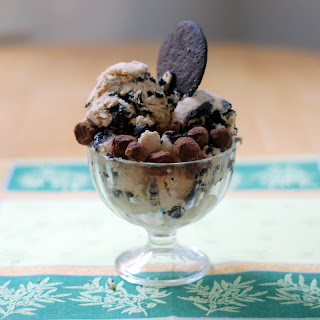 
Puree the peanut butter, sugar, half and half, salt, and vanilla in a blender or food processor until smooth.

Chill the mixture thoroughly in the refrigerator, then freeze it in your ice cream maker according to the manufacturer’s instructions.

My addition was to mix twenty crumbled Nabisco Famous Chocolate Wafers, as I transferred the ice cream from the ice cream maker to the storage container. I also added chocolate covered candied macadamia nuts (which will be another post).