We have a winner! A visit to Rotuno's

Barbecue, like pizza, ice cream, sushi and so on, incites a passion in people that is hard to explain. Why is it that we get so damned chippy when it comes to any of the above subjects? I think it ultimately comes down to the fact that we are all brought up with, and develop, different ideas about what "good" represents.

I had made a comment some time ago about Hot Sauce Williams on Yelp that didn't go over too well. This lady who was somehow related to the owners of HSC told me I didn't know what I was talking about. That HSC was the best she had ever tasted.

Hey, whatever, if that's what you think, great. Don't come to me saying that I'm a moron when you're related to the owners. I don't think it's a very objective opinion. It's kind of like the guy from Flemming's who a few months ago was reviewing his own restaurant.

When I went out to the nether regions of Lorain County to see some friends of mine, I had to take the opportunity to try Rotuno's Texas Style Barbeque, in Elyria.

My favorite barbecue in Ohio is City BBQ. I love it. I love the meat. I love the sides. It's just a great place, the only problem is it doesn't have a Cleveland presence. Rotuno's, I had heard, was just as good, (if not better).

My good friend Jonathan, who is the biggest carnivore I know, and I walked into Tim Rotuno's little rib joint in Elyria. 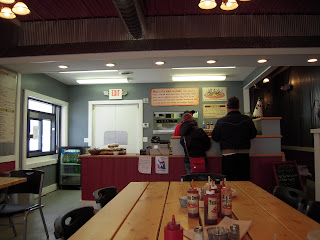 The interior reminded me of Chipotle. There was a combination of corrugated metal, wood, and painted gray drywall. It was actually a very smart way to do it. There wasn't a lot of porous surface area for stickiness to adhere to.

We both ordered the half slab of rib dinners. Normally I don't get something like that for lunch, but I thought it only appropriate to judge a barbecue place by it's ribs. The first thing I did was tear off one the rib bones. A smile immediately came to my face as I saw the pink meat, a telltale sign of slow cooked meat, staring back at me. We had were enjoying the real deal here.

The one thing I was really disappointed by was the sides. The fries were the wide frozen ones like you find at Arthur Treacher's. The beans and cole slaw seemed very plain. None of them tasted bad, I just thought they lacked the same care that the meat had received.

I got a pulled pork sandwich to go, (for lunch the next day). Awesome, by the way.

Rotuno's has been in business for a little under a year, I think, (don't quote me on that). I think he's perfected the meat cooking. It's done extremely well. Very authentic. He needs to start working on the sides and making them more personal to the restaurant. That is the only real criticism I have. Oh wait, I have one more : no website. I think if your in an out of the way place like Elyria you have to have a website. People want to see if it's worth the drive.

The store is kept spotless. The staff is very personable. They cook everything from pork, to beef, to chicken, to turkey. The prices are very reasonable. A half a slab dinner is $12, a full is $20, served with two sides and Texas Toast. They also cater and have family sized meal deals.

This is the best in Cleveland, and if the sides improve, probably Ohio. You have got to go here if you are a barbecue fan. I think it's better than Al's Bubba Q, and much more reasonable in price. 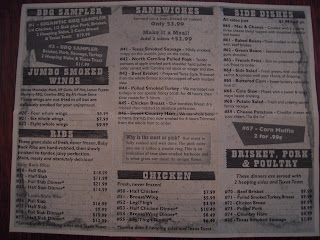 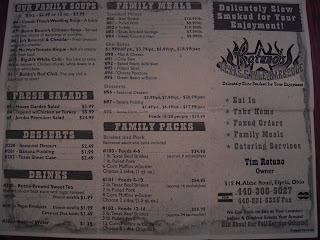