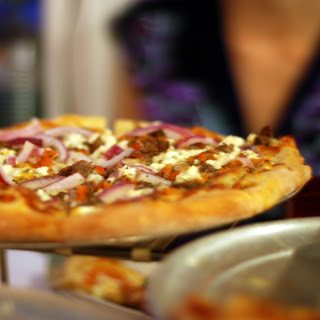 Let's talk about the Plain Dealer's Pizza Playoff. As you can well imagine, I was pretty excited about the Plain Dealer's Pizza Playoff when I first read about it about a month ago. Set up like an NCAA March Madness bracket, readers of the Plain Dealer and Cleveland.com nominated sixty-four of their favorite pizza places in what I'm guessing is the paper's circulation area. The top 16 shops were then put into four specific geographic areas. For the first few rounds, leading reader vote getters progress to the next rounds until there is a final eight for a panel of judges to vote on. Once it gets to the judging stage, pizzas are tasted from the respective finalists and a victor is crowned.

What do I think about this?

Let's start with the good. If you read Dine O Mite! with any regularity, you're painfully aware of how much I love pizza. No matter where they're located or what the place looks like, I'm pretty much game at least once. Mom and Pops are a must and this contest did a pretty good job of providing some names I wasn't really aware of. *As a side note I'll be updating the Cleveland map to reflect markers for those that made this list.* I think this is great news for a lot of these smaller or newer places that don't typically advertise (Dan Joyce's Sweet Basil comes to mind. The guy doesn't advertise. Doesn't offer discounts. Just cranks out solid pies). Deserving or not, I think this is a shot in the arm for the local guys.

What could possibly be bad about this? I take issue with the voting. I absolutely abhor popularity contests with all of my being - that is what this is for the first few rounds. They have sold a fair amount of ad space and I have received a bunch of emails (from restaurants) suggesting I vote for their pizza - every 12 hours!. Really? I mean come on. Let the chips fall where they may. Pizzazz in Mayfield went so far as to make this offer:

"You can vote every 12 hours! If Pizzazz SOM wins 1st Place, we would like to show our appreciation for your support by offering $2 off any large Pizza".

Wow!!! Two bucks?!?!? Where the hell am I going to spend it all? How much is that in Mugabian dollars? One registered user should get one vote for that round. Period.

I also don't like the small sample of judges for the in person tasting part of the last few rounds. A five person panel? Campy Russell, Dan Malley, Michael Heaton, and two PD readers? I'm sure the restaurant would be more than happy to spring for a few more pies if it meant a larger sample size of judges for the finals. I understand Michael Heaton, he wrote many of the articles in the introduction of the event. Wouldn't the inclusion of all the PD staffers that worked on it combined with readers from the various geographic sections make more sense? The truth is, a lot of people have obviously spent a lot of time writing for and voting on this contest, I think they can do a little better than just five judges. I know I'd put a little more stock in the results if included more people.

I love the idea. As someone who spends a lot of time traveling for my job, pizza is a constant interest to me. My pizza roadmap is actually this gorgeous list put together by the people at Slice. *Warning very slow to open, but worth the wait. It consists of the 64 best pizzerias in the entire country. There are obvious exclusions, but the biggies are all there. Had this been in Food and Wine it would have been widely talked about., but it wasn't - it was buried in an issue of Rachel Ray magazine. My point is, I now have a Cleveland list, that people thought enough to vote on - even if it was every 12 hours in hopes of a $2 inducement.

All told, I think this is great start for people that want to explore different pizza shops in Cleveland (I know I will). I have no doubt a great pizza is going to ultimately be picked. (Prediction: It won't be Rascal House.) I just wish the crowning of the winner was more reader inclusive than it is. After all, they did all the work for the first few rounds.