Americanized Mexican. Is that an accurate description of the lion's share of Mexican restaurants in the NEO? The chips are from a bag. The salsa is from a jar. The margaritas come from a machine. The kind of hole-in-the-wall places you find in SoCal just don't exist in these parts - at least the parts not named Painesville. I'm not suggesting it's necessarily a bad thing, it's just that there's a homogeneity to the whole idea that doesn't yield a whole lot of creative inspiration. 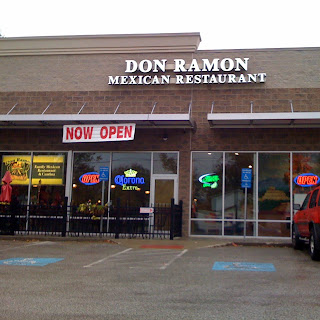 El Storefront
The recently opened Don Ramon fits into the typical Mexican that most Clevelanders are accustomed to. The space itself is surprisingly large. I thought it was fairly large until I went to wash my hands and realized it was double the size of what I originally thought it was. The tables have individual themes hand-painted on them and then covered in urethane. If you must know, I sat at the USA table.
Chips and salsa spun onto the the table before I even had my jacket off. Our service was friendly and efficient. I should note that it helps we were there on a Sunday night after 7:30 - not exactly prime time anywhere in this city. With a cold beer in my hand and chips at fore the waitress took our orders. Chorizo Pollo for me, and Shrimp Quesadilla Rellena for the bride.
Before you could say "Yo quiero Taco Bell," the food came out. (I don't really like Taco Bell, it's just that that's about the same amount of time it took for the food to come out - fast.) My dish was basically a mixture of chorizo, chicken strips, and cheese, with a side mound of rice and refried beans. The chorizo made it interesting, but it was what it was. Regina's shrimp quesadilla was pretty heavy on the cheese, and also was, meh.
The food here is nothing special. There are no surprises good or bad, although some fisticuffs at the bar would have broken the quiet a little bit. With other stores around Ohio, it's pretty standard fare, and for a lot of people that's good enough. Would I mistake it for Frontera Grill? Momocho? El Tango Taqueria? No, but I could certainly take an old school guy like my dad there and he'd be perfectly content. The portions are large, and the prices are just okay, but it is a Mexican chain. Take it for what it is.