Instead of flying out to Hawai'i all in one day, this year we flew to LA, stayed overnight and then flew first thing in the morning to Maui. What a difference a break makes. This was actually the way I think we'll probably do it from now on. (I'm afraid if I was to stay over in San Francisco, I'd be torn on whether to get on the plane or not.)

As with most major metropolitan areas, I had pizza on the brain. Actually that's not totally true. Regina and I have wanted to try Pizzeria Mozza ever since we had the olive oil drenched crostini topped with burrata and roasted tomatoes at the Great Chef's Event in Philadelphia.

My other motivation is to give some love to all of the establishments that made Ed Levine's and *gulp* Rachel Ray's, Pizza Madness bracket. Pizzeria Mozza makes it to the final four for the Western Bracket, which is quite an accomplishment given the contenders in San Francisco, Portland, and Seattle.

Getting back to our visit.

I called and made a reservation easily enough a month ahead of time. As with most popular restaurants that use opentable.com, prime times were blocked out. Should you not have the luxury of getting a table that far ahead, there is open seating at the bar and around the kitchen area. Depending on how interested you are in your dinner companion, it might actually be the ideal place to sit.

The decor is what I've come to expect from this tier of dining  at a Batali / Bastianich restaurant. The space as a whole is smaller relative to neighboring Osteria Mozza. I'm going to guess capacity is somewhere in the neighborhood of  70-80. They do a pretty good job of shoehorning everyone into their seats, but know that you're probably going to learn a fair amount about your neighboring diners. While certainly not the loudest restaurant I've ever been to, there is definitely a din that could deter those who are sensitive to noise.

But what about the food?

I'm actually going to cut to the chase here because all I really want to talk about is the pizza. I think ideally, I would order a couple of items off the antipasi section, or share a salad (they're big) and one antipasto. We ordered the butternut squash bruschetta and I have to say, if you're getting a pizza it seems a little redundant. Not that they're bad, it's just that there are less "bready" things that would compliment a delicious pizza a bit more than toasted bread topped with something. For dessert, the butterscotch budino is legendary. I've had it, but the maple budino at Locanda Verde in NYC, has pretty much ruined budinos for me.

And then there's the pizza....

Nancy Silverton has developed a dough recipe that is so undeniably enjoyable, that it damn near overshadows everything else on the pizza. This is a classic case of pictures not being able to do something justice. At first glance, it would appear that trying to eat every bite of the crust would be a feat of jaw strength and stomach space. The reality is, that it's one of the most light, airy, crispy, and flavorful corniciones (crusts) that I've ever had the pleasure of biting into. 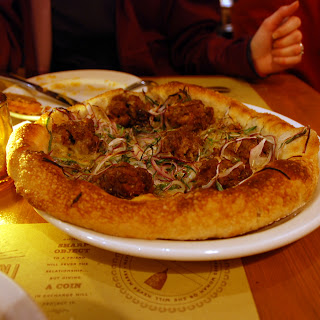 Fennel Sausage Pizza
Silverton's dough offers the crispy, blistered goodness that you find at places like Emilia's or Franny's. The kind of crisp that you get when you toast a bagel and ever so thin blisters  plump slightly outward, making it impossible to bite into without making a significant amount of noise. The inside has the vast labyrinth of whole structure you get from a well fermented dough that hasn't been beaten into submission by a careless pizzaiolo. The wide, seemingly bloated, cornicione compresses into what I can only characterize as the "perfect bite". It's that good.

We ordered the Fennel Sausage with panna (which was a hugely pleasant surprise), red onion and scallions, as well as the Funghi Misti with chanterelles, fontina, taleggio, and thyme. Both were good for different reasons. The fennel sausage actually comes out like medium sized meatballs. At first glance, you look at it and wonder how you're going to eat this whole thing, Cooler heads prevail and you figure out that breaking them into little pieces and spreading them about the pizza is your best bet. The chanterelles are the star of the Funghi Misti. The pungent earthiness of the mushrooms try there best to share the stage with the uber fabulous crust. Regina feel in love with these mushrooms when we had them at Pizzeria Picco up in Larkspur, CA. Both were amply topped with a generous allotment of thinly sliced and ever so slightly charred vegetables and herbs.

My overall impression is that Pizzeria Mozza is every bit worthy of the high regard that it's held in by the pizza cognoscenti. I have to say that Nancy Silverton has really put together a pizza dough is the stuff of dreams.. The pizza here isn't cheap, but it's a pie that certainly warrants such a price tag.