The macaron is an obsession of ours. In my travels I have found myself slipping into LA Burdick in Cambridge, just before closing, so I could take them home the next day. I've made special arrangements to pick up macs around 5:30 am at Mille-feuille near Washington Square. A final send off from San Francisco has been marked at the boarding gate with the two of us polishing off a box from Paulette (or what is now called 'lette). And I have been to Pistacia Vera right as it opened, so I could surprise my wife when I came home from a conference in Ohio's capitol.

Connoisseurs? Sure. When done well, which isn't as often as you'd think, they are truly incredible.

The shells are finicky. You can do everything correctly, and for no reason whatsoever they just don't seem to behave. Hollow tops, dense insides, small to non-existent feet, too hard, too soft, there is a whole list of things that can go wrong and an equally long list of reasons why. They really are a lot like a golf swing - seemingly simple, but a million things can go wrong.

But this post isn't about how to make macarons, it's about our favorite in Ohio.

Housed on the edge of Columbus' timeless German Village in the old Reiner's Donut Shop, is a sleek French bakery called Pistacia Vera. The old Reiner's name is still attached to the rear side of the building that faces E. Hoster Street. When the weather is warm, there are tables and chairs set up out front. 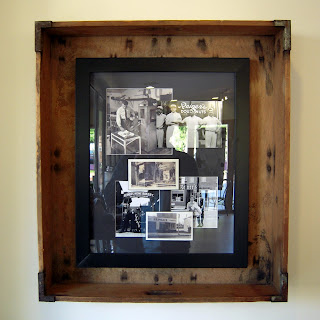 Old pictures from Reiner's, framed inside an old donut box
Inside you'll find a very simple, clean interior that showcases their vast array of offerings. While they are very well known for their macs, I can honestly say that most everything I've had has been just as well crafted and delicious. Some of my favorites have been the sable, bitter sweet fudgie, and chocolate chunk pistachio cookies. Although I've never had them, PV also offers favorites like croque monsieur, quiches, and other French breakfast favorites, as well as coffee drinks. 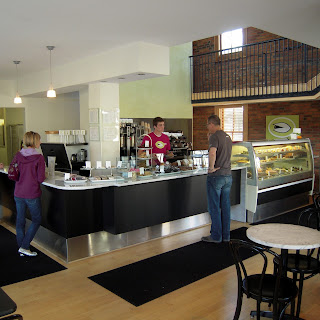 The Counter
But it's really about the macarons, right? First off, they're a pretty substantial size. They certainly aren't as ridiculous as the ones I've had a J. Pistone in Cleveland ($4 a piece and a good 3" in diameter, but probably my favorite in Cleveland). But they aren't as small as the traditional size which usually measure somewhere around the size of a quarter. I'd say three small bites and they're gone. A pretty good size if you ask me. 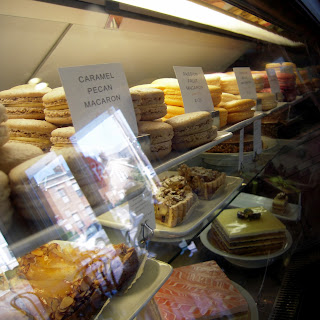 The Case (look at the frothy feet on those things)
Our favorites are the pistachio (I think they make those shells out of ground pistachio instead of typical almond flour, which makes for a very pistachio-y mac), the maple walnut, caramel pecan, passion fruit (very, very good), and the mocha. The pumpkin spice and chocolate peppermint are pretty overpowering. Those two are really the only ones I would straight up avoid.

The shells are pretty consistent from density standpoint, and are not overly sweet. The fillings are also not overly intense and seem to be firm enough so as not to squirt out the sides, yet soft enough to easily bite into.

Pistacia Vera is certainly part of a rising tide that is raising all boats in the capitol city. In a town that was once a bastion of chains (and in a lot of areas, still is), a local food scene is picking up some major steam here. This little bakery is a must see if you are in the area. They offer a high quality product, with an equally high execution, at a great value.