In terms of highway driving, the stretch between Cleveland and Albany is pretty desolate when it comes to places to eat. While I'm sure there are some great places that I don't know of, to the casual observer making their way through the Southern Tier, things don't appear too interesting. That is.....until you get to Oneonta.

You see, just as the dread of your long drive - unless your headed to Boston - enters its closing scene, a building off to the north of the highway pumps delicious plumes of smoke at you. Three large buildings - one with hungry people, one with a gift shop, and one with smoked meats - coax you off the highway. 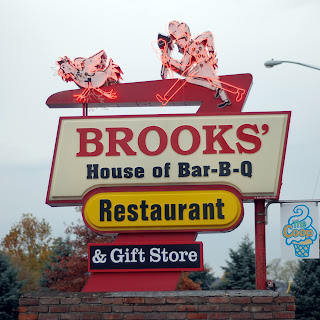 Brooks' House of Bar-B-Que hooks up restless vacationers and hungry locals with the regional favorite Cornell Chicken, as well as a whole host of other barbecue favorites. They sell what's called a speidie sauce which was brought to the Binghampton area by Italian immigrants and is used on sandwiches. Since Brooks' sells the sauce, I'm assuming that this is the marinade they soak the chicken in, although I don't know this for sure. 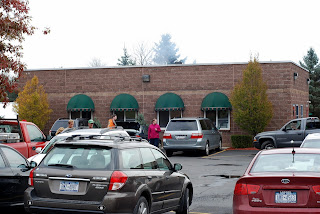 How much meat do they go through? Well, that's the Smokehouse.
What I do know is this: If you get one thing off this entire menu - and there's a lot of stuff on it - get the chicken. Since I still had to continue on to Boston I decided to eat in my car. I ordered a half chicken with fries. As you see from the picture there is a fair amount of char on the outside of the meat. I'm assuming that the marinade facilitated some of blackened goodness. What I really found interesting is that the chicken was damned moist. Not just the meat itself, but the outside of skin. It wasn't crispy. It wasn't soft and mushy. There was a well seasoned combination of skin and char that I've never had before or since. And unlike most chicken, the skin didn't come off in one thick sheet. You could bite into it and it stayed in place.This was absolutely worth the price of admission. (The fries weren't bad, either.) 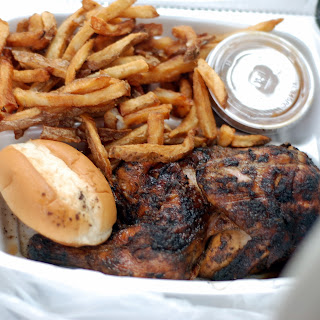 It looks burnt - it's not. It's delicious!
I've been four times. The second trip I had a momentary lapse of reason and decided to expand my horizons with the chicken and ribs combo.Though a little heavy on the sauce, I thought the ribs would be perfectly acceptable at any local barbecue spot. More than acceptable, actually - exceptional. But I have to say, a trip to Brooks' that doesn't involve as much of that fabulous chicken is your stomach will hold is...well....a downright travesty. The flavor : dollar ratio is heavily skewed toward flavor.Get a full order of chicken!

This little oasis in upstate New York is a pretty isolated for a straight up road trip. I would suggest that if you have a reason to be in the area, or on your way to Cooperstown, you would do well to stop by for a tour of Ommegang Brewery a couple miles south of the Baseball Hall of Fame. In terms of breweries, it certainly is an impressive place architecturally.The Hall of Fame ain't half bad either.

I've not been to Phil's House of Chicken in Endicott (not far off I-88 near Binghampton someone needs to learn how to type. A) It's I-86 - not I-88. B) It's Binghamton - not Binghampton.), but word is that this is the classic example of Cornell style chicken. A project next year should bring me through these parts again, so I'll make sure to report back.