Pizza in Cleveland for the most part is pretty average. I don't mean to sound like a snob, but if you look at the majority of the pizza that is consumed in this town it is no better than most you'll find in other middle-of-the-road pizza cities. We can, however, take solace in the fact that it isn't as bad as the stuff being sold in Columbus.

That being said, you tend to have an attachment to the pizza you're raised on. With any luck you didn't grow up across the street from a Domino's or Pizza Hut. I think in his book "American Pie", Peter Reinhart summed up best:


Some of my favorites (Antonio's, Compola's Tasty Pizza, Angelo's) all have a very similar appearance and structure that I like. I think they exemplify the pizza that most of us grew up eating. Sweet Basil does a nice Jersey-fied Neapolitan, Vincenza's the best New York Style incarnation, and deep dish....well....a good deep dish can't really be found here in Cleveland.

So where does Noce Gourmet Pizzeria fall in all of this? 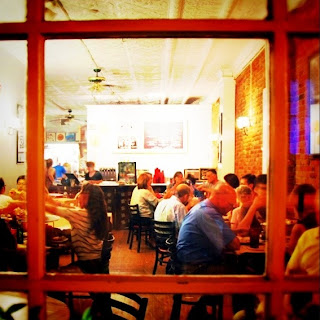 On the Outside Looking In


Would you believe they fall in the "None of the Above" category? Most likely, "California or West Coast" style?

On our last visit to San Francisco, we ate a ton of pizza. You can choose to believe it or not, but San Francisco pizzaioli put together the best combination of toppings I've had anywhere. Toppings are king in SF. There's a bone marrow pizza at Flour + Water that I will be trying the next time we're in Mission.

One would think that the "Sour Dough Capital" would excel in the crust department, but in reality New York and New Haven have them beat by a mile.

So what does this have to do with a little pizzeria that sits in the square of snowy Chardon, Ohio?

First let me tell you that you aren't coming here for the crust, the bread, the dough, the cornicione - whatever you want to call it. That isn't to say it's bad - it isn't. What I'm saying is that people will not recognize Noce's dough recipe as being like anything they've had around here. If I had to describe it, I'd say it has the chewiness of a typical Cleveland Pizza crust, but has the crunchiness of a French bread. In reality, this particular crust holds up really well to reheating. 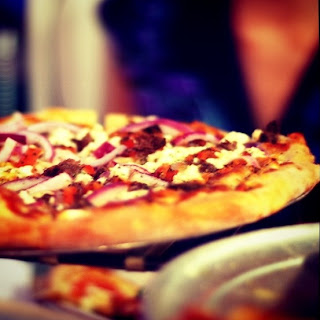 
On the West Coast, the toppings are the star. Here's a list of some of my favorites:
I would veer away from the traditional Margherita (reserved as the measuring stick of a truly good wood fired pizza), Pepperoni (you didn't drive all the way out here just for that, did you?), or the Sausage Combo (the only pizza I didn't like, because there were too many olives.Unless you're an olive freak, ask the kitchen to go easy on the briny little suckers. If you're not a fan, just exclude them all together.)

It gets better! BYO! Most pizzerias have horrible beer and wine lists (the exception being Compola's Tasty Pizza, they have a cooler loaded full of excellent craft beer), but here you have no one to blame but yourself. Pliny the Elder, Golden Delicious, or whatever - it's all up to you. Be warned, there is no place in the square that sells bottles for carryout. There are some grocery stores at the bottom of the hill that you can buy from. I advise planning ahead and bringing something you really like.

This cozy little shop doesn't stay open 'till all hours, so be forewarned that you want to get there before 8:30. I'd hate to see you drive all that way for nothing. If you happen to be in town at lunch, they sell pizza by the slice, as well.

So there it is folks. In terms of not being in the Urbanspoon Top 100 or any other lists that you'll find in Cleveland - Noce Gourmet Pizzeria in Chardon is a heavyweight. Tastefully decorated, BYO, and most of all unique one-of-a-kind pizzas are all here in one place. In my opinion, this is the closest thing to contextually and paradigmatically perfect pizza as you'll find in the area.