If I had one word to describe Zingerman’s anything it would be "details". Attentive, friendly, knowledgeable service can be found at any of the various outlets in the Zingerman’s franchise of endeavors. You can bet that someone has brought back some of the best and intriguing food stuffs from afar and brought them back to Ann Arbor to share with their customers.

Zingerman’s Roadhouse is a homey sit down restaurant with a slant toward bringing back the best that regional cuisine has to offer. As with the other arms of the Zingerman’s empire, the best of the country’s best regional gems have been collected under one roof. From crab cakes to corn dogs, brisket to ribs, regional traditions have been put on the menu for all to enjoy.

The Roadhouse offers a good selection of locally brewed beers on draft as well as an impressive list of bourbons. If beer or bourbon isn’t your thing, the bar also offers a vast selection of nostalgic cocktails. 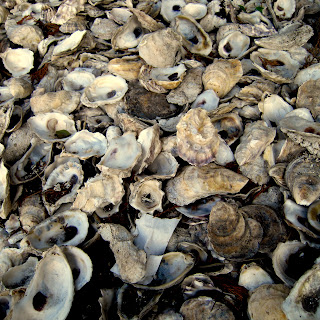 
As you walk into the restaurant you see a teapot shaped trailer out front. This trailer serves food breakfast, lunch, and dinner to go. A sign pointing you in the opposite direction of the trailer sends you to the front door (which has spent oyster shells whose gifts were enjoyed some time ago). I actually found the oyster shells much more interesting to look at than the typical mulch you find outside most sit down restaurant. 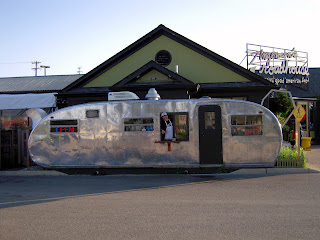 The Roadshow Trailer (in the shape of a tea pot)


One of the first things I noticed upon walking in is the salt and pepper shaker collection. I suppose it’s one of those things that you never really think about collecting until you…well…decide to collect them. I’m not quite sure how many they have, but it’s pretty obvious these things are really old and pretty cool. 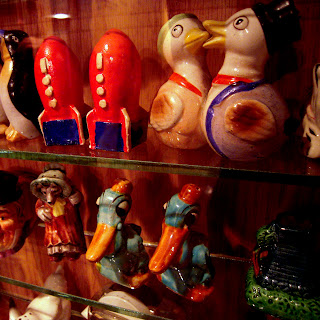 
The food here represents a wide array of down home favorites from across the country. I have a particular affinity for North Carolina barbeque, so I locked onto the pulled pork sandwich almost right away. I think one of the cool things about anything Zingerman’s is that they really want you to be happy with what you get. Not sure what kind of sauce I wanted on my pork, the server suggested that I try all three and decide what I want. After a few minutes she came back with all three sauces for me to try – with a small shred of pork in each one! I was impressed – it would have been very easy to just squirt a dab of each on a plate and hand it to me. Smalls things like this really grab my attention.

After settling on the South Carolina Mustard sauce (highly recommended), I told the server that I didn’t need the bun. When she asked if I wanted another beer I passed because I had to drive back to Cleveland that night. Would you believe since I passed on the bun she gave me a bottle of iced coffee for the ride home? *Excuse me while I dig around in my pocket and pull out another gold star.*

A popular complaint people have is that it’s a few dollars more for the food than it should be. I suppose if we were comparing apples to apples it would be, but the quality of the ingredients -as compared to conventionally produced food - and the level of cooking certainly warrant a slightly higher cost. If you pair the quality of the food with the enthusiastic service that Zingerman’s instills in their staff…well….I think the price point is appropriate.

Zingerman’s Roadhouse isn’t for everybody. If you’re looking for the maximum amount of food for the least amount of money (there's a Golden Corral in Westland (734)641-9163), then this is definitely not the place for you. If you want well researched cooking methods that stay true to their region of origin with an appreciation for quality ingredients, then Zingerman’s Roadhouse definitely needs to be on your list of Ann Arbor stops.