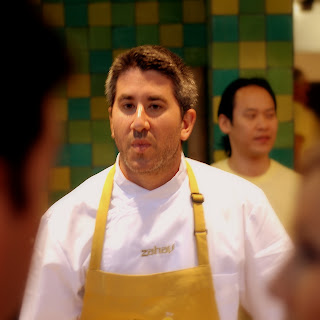 
I said I was going to highlight a number of our absolute faves from The Great Chef’s Event last month in Philadelphia. Regina and I decided that we would start out with our favorite dish from the whole event and work our way back to maybe the fifth dish.

If you look at any of the “Best of” lists in Philadelphia, Michael Solomonov’s Zahav is a name that comes up again and again. Admittedly – I’ve never been. After sampling his lamb kebabs I have to say that Zahav will be on my list of must haves the next time I’m in Philadelphia. Since I'm a barbecue animal, Michael's Percy Street Barbecue will also be on the list of places to go.

I think one of the things I love so much about these events is that such a small bite of food – if done well – can make a huge impression. It’s like some giving you one paragraph from a book and asking you if it was good enough to make you want to read the entire thing. As far as two bites go – this was one hell of a dish.

When you attend the event they give you a book that has a brief blurb about each chef, in some cases the chef includes the actual recipe for their dish from the event. This lamb kebab was in very high demand – so much so that they couldn’t keep up with the line. This recipe is one of the more simple things you’re ever going to make that tastes this good.

There are a grand total of seven ingredients that makeup these kebabs. When we had them at the event I think they rolled them in sausage-like form and then cut them into ¾” – 1” disks and then put them on a skewer flat. When I made them I skewered the entire sausage and then sliced them into disks.

I don’t know that these were the exact recipe from the event - but it was damn close. For whatever reason I don’t remember the pistachios being in there, but that doesn’t mean they weren’t. The wheels actually started turning as I ate these things. They’re so delicious that I though, “You know what? The hell with cutting them into disks; I could cook them as lamb sausages on a bun with some tahini and feta.” At the event I think they cut them into disks and then laid them flat, skewered them, and then cooked them four minutes on each side. (I cooked them like sausages and then cut them.) I think cutting them and grilling them flat is much more attractive.


Thanks for the awesome recipe Michael. 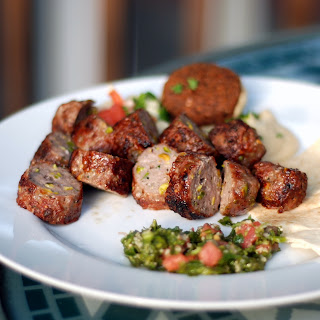 Lamb Kebabs with Iranian Pistachios and Mint
by Michael Solomonov

Ingredients As is often the case with recipes that call for "out of the ordinary" ingredients, I had to troll through the Middle Eastern markets to try and find certain items like Urfa Biber peppers (which no one had). I ended up trying a few places and here are some thoughts:

Al Madina Imports
11550 Lorain Road
Cleveland, OH
The owner - I'm assuming he was the owner- went around the store with me and tried to steer me in the right direction. He did inform me that baharat simply means "spices". He assured me that it more or less referred to seven spice. The store was certainly the smallest of the three I went to. No AC. (Not that Cleveland has too many 95 degree days.)

Holy Land Imported Goods
12831 Lorain Road
Cleveland, OH
This was my favorite of the three stores. They probably only beat out Sahara because they had the AC cranked (the others might have had it but it wasn't very cool inside). The selection is very good here and the store is very clean.