Hawaii Regional Cuisine in Cleveland - An Interview with Alan Wong

For those who are not familiar, Alan Wong is a pioneer in the movement of Hawaiian Regional Cuisine (HRC). HRC was an idea started among local Hawaiian chefs committed to using their areas’ best produce, fish, meat and poultry in their restaurants. The movement continues today, with Alan Wong being at the forefront of Slow Food, Hawaiian style. Mr. Wong operates 3 restaurants: his flagship location, Alan Wong’s Restaurant in Honolulu, The Pineapple Room in Honolulu and Alan Wong’s Tokyo. In addition to being the winner of the 1996 James Beard Northwest Chef Award for Best Chef, Alan Wong has received numerous accolades, including being named one of America’s Top 50 Restaurants by Gourmet Magazine. His restaurants continue to be top dining destinations and year after year, he has the number one Zagat rated restaurant in Hawaii.

Chef Wong is a staunch supporter of local Hawaiian farmers and makes a point to craft his dishes around quality, local product. His King Street Restaurant hosts an innovative, quarterly offering, called the Farmers Series. In addition to allowing guests to sample some of the best local fare available at these dinners, it also allows the unique opportunity for those same guests to interact and meet the farmers who helped to bring their meal to the table. Alan Wong is a visionary, a teacher, an artist and it was with great awe that my husband and I sat down to interview him during a recent trip he made to Cleveland in early June 2009 to participate in the Five Star Sensation Benefit for University Hospitals of Cleveland’s Ireland Cancer Center.

We’ve decided to provide you with our “Top 11” (10 just wasn’t enough) highlights of the interview. If you find yourself in Hawaii one day, you owe to yourself (and your taste buds) to treat yourself to meal at Alan Wong’s…it was the culinary highlight of our trip and we can’t wait to return. 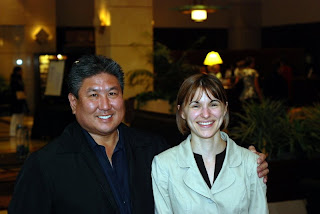 11. Alan really didn’t like eating vegetables as a kid; he didn’t venture outside of carrots, peas and corn. He has memories of going to school at the age of 4 and being served vegetables for lunch. The pickled beets made him gag, so he would stuff the veggies he didn’t want (e.g. cole slaw, broccoli, etc.) in his milk carton, and then take them out and put them his pants pockets.

10. Hawaii is showing its commitment to the local food movement, through efforts such as farmers markets and sustainable fish. A ban was put into place on snapper fishing for five months out of the year and they have seen great success with sustainable fishing methods for Moi and Kona Kamapachi.

9. Alan Wong’s Restaurant in Japan features proteins from Japan; the Japanese prefer not to ship in proteins from outside countries. He travels to Japan three times per year and noted that the Japanese really know their food. As for their palates, he has found that due to Japan’s distance from the equator, he’s had to tone down the sweet and salty flavors in his food that diners in Hawaii typically have an affinity for.

8. The location of the flagship Alan Wong’s restaurant on King Street in Honolulu was originally to be the accounting headquarters for Zippy’s, a local fast food chain. Francis Higa, one of the founders of Zippy’s convinced Mr. Wong that the location would appeal to local Hawaiians and that if he created the food, they would come to eat it. He was right; this is their 16th year in business at that location and he has no plans to move elsewhere. King Street is “home.”

7. Alan Wong’s infamous Ginger Crusted Onaga with Corn, Mushrooms and Miso Sesame Vinaigrette was born of the cold Ginger Chicken he enjoyed as a child. However, it took many tries and failures before discovering the winning combination that has become the most popular item on his menu today….he tried serving ginger chicken, ginger steak, ginger tuna, mahi, and ono, but nothing took off. Then one night, he tried the recipe on Onaga; it was a hit when they sold 20 that evening. The Miso Sesame Vinaigrette was the marriage of two dressings he had been working on. This dish, he felt, was a classic case of knowing you have a good idea and not giving up on it. With time the opportunity could present itself and who knows – maybe it becomes an all-time favorite.

5. Besides New York, favorite food destinations for Mr. Wong are Tokyo and Singapore. He’s been to Tokyo over 30 times and he described Singapore as being extremely clean and having excellent street food. If you are willing to get your hands dirty and don’t mind the spice, he highly recommends trying Singapore’s Black pepper crab and the Chili crab. Notable New York restaurants he mentioned were Café Boulud, Spice Market, and Per Se.

4. Creating his cookbook, Alan Wong’s New Wave Luau, took about three years. The complicated process involved adjusting recipe portions to accommodate the home cook, making metric conversions, hiring a recipe tester, tasting recipes made by the recipe tester and then applying necessary changes based on the outcome. The average person doesn’t realize just different a restaurant recipe is from one used for the at home cook.

3. Mr. Wong said that he was once told, “If you don’t learn the operations of the house, the chef will run circles around you.” Branching off that advice, all employees at Alan Wong’s Restaurant have to work their way through the ranks, just as he did. They start with the basics, working as bussers, warming bread in the kitchen, etc. Over time, they move up through the establishment, learning the food, the farmers and the business.

2. With creating a dish, he tells his chefs to practice “Constructive Discontent.” In essence it means to question yourself, but that you also need to know when to stop.

1. Alan Wong took some time to learn about us during the interview. After hearing about my dessert obsession, he shared with me a Hawaiian treat to seek out on my next trip to Maui. It’s called Guri Guri...read more about it here. This has me already dreaming about my next trip to Hawaii.
Posted by Dine O Mite! at 8:49 PM