Veggie U Benefit at Chef's Garden

I have been absolutely swamped with work for a while now (not that I’m complaining). Between that, my Facebook obsession, and the paint stripping project on the incredible molting house, there really hasn’t been a lot of posting on the old blog.

I’m here to tell you that those days are over. We’re pooling all the stray scraps of paper, unfinished drafts, and the numerous food related things we’ve been sitting on for what seems like an eternity.

I am going on record as saying that there will be one post per day until we get caught up. So without anymore dilly dallying let’s crank it up.

Last week we had reservations all set up to attend the Chez Francois Bastille Day dinner on Sunday night. This is hands down my favorite restaurant in Northeast Ohio, (even if it is just on the western edge of it). After we had made the resy Jonathan Sawyer announced his Bastille Day dinner which, too, sounded awesome.

In the end it was a moot point since I had to leave Sunday afternoon so I could get to a 7am appointment in West Orange, New Jersey on Monday. No Chez. No GHT. Just a big plate of jack squat.

Since we missed out on the Bastille Day festivities we decided that we had to go to the Veggie U benefit at Chef’s Garden in Milan, OH.

If you’ve never been out there you’ve got to see it. As far as farms go, this is the cleanest most professionally run place I have ever seen. The stuff they’re growing out here is absolutely mind boggling (it was on par with Stone Barns in my opinion). The quality of this produce is off the chain.

As you arrived you were given little wine glass for the different wine people in attendance. You also received a blue ticket that represented your vote as the favorite dish of the night.

The chefs were located in a massive ring around the perimeter of the large tented area. The attendees moved around under the tent to sample the various food and wines. There was also a large tent in the back where the chef cook-off took place. We were so immersed in talking with the chefs and eating the food that we didn’t actually watch the cook-off (or any of the demonstrations for that matter).

So who got our blue tickets? We couldn’t decide on one person to give both tickets to, so we gave one each to Jeff Fisher of Touch Supper Club and one to Tim Maxin of Muse at The Ritz Carlton Hotel in Cleveland.

Jeff (who missed first place by 5 tickets) was serving a St Germain Cured Salmon with a savory lemon curd, on a squid ink tuile, with vidalia onion confit, and crème fraîche. Just a very well thought out dish based on ease of consumption, visual presentation, and last but not least – flavor. I thought it was an awesome idea. He also served a Rack of Lamb with heirloom tomato feta compote, and purple cauliflower puree that people loved, as well. 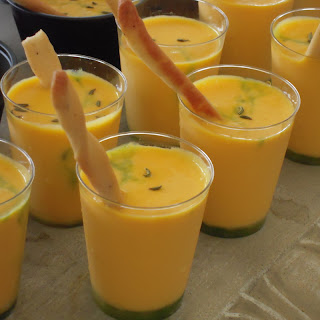 The Chef's Garden Carrot Smoothie from Tim Maxin with Muse Restaurant at the Ritz Carlton Hotel of Cleveland
Tim’s dish was actually very simple called The Chef’s Garden Carrot Smoothie with anise hyssop syrup (a licorice and taste combined with simple syrup) and dried fennel caviar. Poured in a small shot glass the hyssop syrup was in the bottom and the carrot smoothie (carrots that were cooked in orange juice and ginger that were pureed and then mixed with milk and ice cream), then topped with fennel seed. Since the hyssop was on the bottom of the glass it was the last thing to pile onto your tongue as you drank it. The ease of consumption, originality, and excellent flavor definitely made this blue ticket worthy.

If I had to pick out one last highlight it would be talking ice cream with Jeni Britton Bauer. She was very forthcoming about the history of Jeni’s and how she got to where she is today. For example, I had no idea that she had been the pastry chef at La Chatelaine (which is one of my favorite brunch places in Columbus). I also had no idea that she had a previous ice cream stand in North Market called Scream. What an interesting person.

I think the price for something like this is definitely a deterrent for many people. What I’d like to do next year is get a pool of eight or more people so the price goes from $150 down to $100. For a 100 bucks this is definitely worth the price of admission.
Posted by Dine O Mite! at 10:40 PM