Hillbilly blood runs through my veins; not all of them, just some of them. (It's a hillbilly thing - you wouldn't understand.)

Refined as my palate might be, I can't restrain myself from stopping at an out-of-the-way hot dog spot. (New Jersey is filled with places like this and Hot Dog Johnny's in Buttzville is king.)

While I was driving back from picking up some stone for my patio, I drove past Hot Dog Joe's in Kirtland. HDJ is just a small little storefront in a country strip mall. Since it was "about that time" I figured I would stop in for a quick bite.

As one would expect, it's a fairly straightforward interior. The cash register/food prep area takes up half the space, seating takes up the other half.

I ordered some type of Italian dog (hot peppers, onions, relish, and salami). As you might expect, the preparation of the tube steak took a scant few minutes to prepare. I ordered this little mixed meat delight "to go" because you just know a hot dog tastes better in your car. 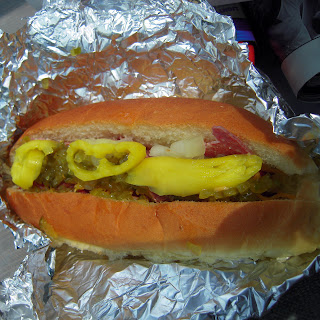 After paying for the merch and saddling up in the auto, I opened the foil wrapper and exposed the weiner nestled in what can only be described as a voluptuous bun. (Think Kim Kardashian.)This was seriously the widest, densest, most voluminous hot dog bun I'd ever attempted to eat.

About halfway through my wiener I had to tap out. The bread was a behemoth. I cherry picked the rest of the goodies off the bread and had to shit can the rest. The bread : meat ratio was off the charts. And dense? Jaw exercises - that's all I'm going to say.

Sorry folks, they can't all be wein...er....winners. The place was clean, the people were nice, the service was prompt. I just couldn't get into the dog, dawg. I encourage all hearty appetites to apply, but the bun was just too damn manly for me.