Dessert on the Fly

I went over to my neighbor's house to stash some stuff in her freezer. While I was there she gifted me a couple of Royal Riviera Pears from Harry & David. When I told her that I'd probably end up using them in a recipe, she got the mortified look on her face, "Oh no! These aren't for cooking! You want to eat these raw!"

I didn't have the heart to tell her that I'm not a huge fan of this particular fruit. In fact, Regina I don't really like pears at all, but it was a gift. I knew they weren't cheap so I didn't want them to go to waste.

Since I obviously don't care for pears, it stands to reason that I don't have any recipes that really call for them. Pretty much everything I've ever made from the Tartine Bakery cookbook has rocked, I figured this would be my one shot at pear dessert glory.

The Frangipane Tart would be the vehicle of choice for this particular dessert. I think it's important to point out that a whole host of fruits can actually top this thing. In reality this is an "I got fruit I wanna use up" type recipe. If you can slice it, you can use it -today it would be pears. 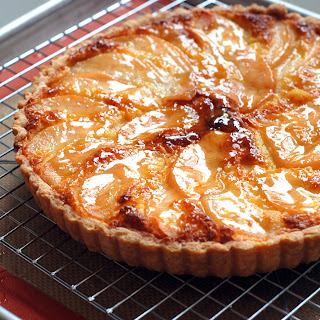 Frangipane Tart Topped with Pears
As usual, it came out well. People loved it and it was a pretty painless dessert to make. It is a really flaky dough that offers a great textural compliment to the almondy filling. The pears pretty much softened up and melded with the frangipane filling. This is one for the "Best of" box. A highly versatile, and very receptive to freestyling type recipe.

I did have a few left over slices of pear, and admittedly, my neighbor was right - it was the sweetest, juiciest pear I've ever put in my mouth. Regular pears would have done just fine in this tart.

The recipe can be found here.