After dinner cookies are a staple at our house. Not a night goes by that we don't eat dessert. I know a lot of people that could go weeks without having dessert. For us it is an absolute necessity. In fact, if Regina doesn't have dessert she gets downright nasty - and not in a good way.

This past summer we were eating ice cream like it was going out of style. The one thing that both of us found is that it is one hell of an easy way to pack on pounds. As the summer wore on, my weight started to slowly creep its way up.

We eventually figured out that the ice cream was the devil, especially when topped with hot fudge, pecans, and freshly made whipped cream. It was about this time that we went into full on cookie making mode. It's taken about five months, but right now we've got one hell of a cookie rotation going. A trip to San Francisco lead to Regina's one suitcase being stuffed full of chocolate we bought at Spun Sugar in Berkeley. (Mine hovered just below 50 pounds with Pliny the Elder.) Cookie making was about to hit a whole new level. 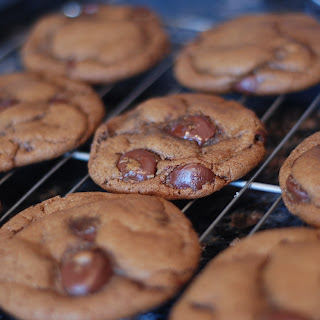 Chewy Chocolate Ginger Cookies
Martha Stewart actually has a very similar recipe to this, and I think we actually might like it a little better because of the fresh ginger and they don't spread as much, but this little gem from Gina DePalma is actually very good. The DePalma version calls for you to chop the chocolate up in to fine pieces, but we prefer a mix of chocolate chunks. As I mentioned before, they do spread a little more due to the use of oil instead of butter, but if they don't sit around that long it doesn't really matter.

Revenge may be a dish best served cold, but these? These are best served about 10 minutes removed from the oven.