We touched upon this a little in yesterday's post about our Five Picks for the Holidays post, but this is our first foray into Pierre Herme's, Macaron. For us, this book was really about exploring his wider array of fillings. I think once you've settled on a technique and honed your recipe, the shells are for the most part an afterthought. With the exception of a few shells such as coconut or pistachio, there really isn't much variability between the meringues.

As I said yesterday, we have a recipe that works well with our stove and seems to yield exactly enough batter to fill two half baking sheets (yields (30) 40mm macs total). In my opinion the oven really seems to be the fly in the ointment when people talk about failed macarons.

We figured we'd start out with a classic that seemed pretty straight forward - the Lemon Macaron. There aren't a bunch of crazy ingredients needed, and the technique was pretty simple. It's basically the coloring of the shells and making the lemon curd. 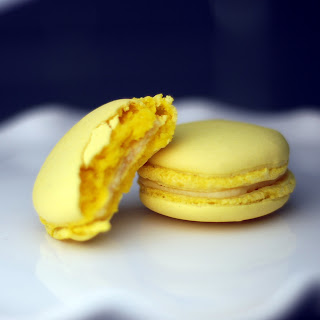 The Lemon Macaron
One thing we find over and over again in Herme's recipes is the presence of some almond flour for the fruit fillings. The two of us weren't quite sure what it was going to taste like, but in the end it did a good job of suspending the curd so that it didn't squirt out the sides when you bit into the mac. It isn't much, but the curd seems to hydrate the flour enough to where it blends in with the lemony filling.

These had a creamier color to them, and aren't really that vibrant yellow you would expect from a lemon mac. I'm not sure how I feel about the pastel-y color of these. I kinda like it, but it also seems to imply something more along the lines of a lemon cream. In the future I think we're going to add a 0.5g more of the yellow coloring.

We were pretty impressed with how the whole thing came together. The shells came out very smooth and the filling wasn't too thin or thick. Aged for a couple of days, these things really take on the lemon flavor. I've attached a link to the recipe here.