As we were passing back through Columbus, it was pretty obvious that our dinners plans were going to diverge. Regina was opting for the more healthy and light fish tacos at Yerba Buena, and me? I was going to load up on meat. Lots and lots of meat. 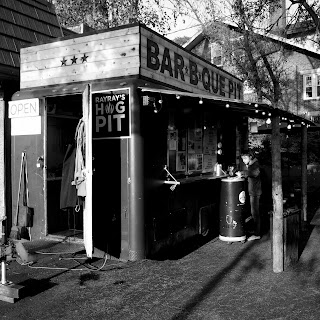 Ray Ray's Hog Pit is a spot I'd just never quite been able to make it to (they're only open Friday thru Sunday). With things needing to be on the quick side so we could pick up the dogs, this was going to be as good as it gets for me without driving out of my way or sitting down for a full fledged meal.

Located just off to the right of Super Food Mart in Clintonville at the corner of N. High and Pacemont, this "truck" serves up old school barbecue. More trailer more than anything, Ray Ray's busts out hickory smoked meat made in a converted propane tank smoker. I have a tremendous amount of respect for people that go old school like this. It's very easy to dry out meat, and requires much more attention than something made in a natural gas fired smoker. Heat loss, wind, and rain all make it very difficult to control the temperature inside one of these things. 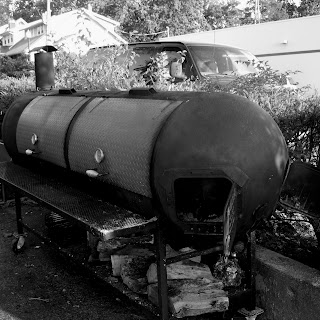 As noble as the idea old school might be, they are charging you for the food, so it had better be good. I ordered a sample size of the ribs, pulled pork, and brisket with a side of beans and cole slaw.

Let's get the middling stuff out of the way first. The cole slaw and beans aren't anything special. I'm not saying that I spit them out or anything. I didn't. I thought they were just alright. They're what I would consider par for the course at a typical barbecue place - classic flavors. The brisket was unfortunately a little on the dry side. Again, the stuff doesn't stay moist forever, depending when it was taken out of the smoker, it's going to dry out a little bit. Again, not inedible or even bad. He could have cheated and thinly sliced it and put some ju on it to mask the dryness, but he didn't - they were full quarter inch slices.I respect that. There was a nice fatty crust on the outside, and a fat ass smoke ring - all telltale signs of brisket done right. I would've loved to bust this when it first came out of the smoker. 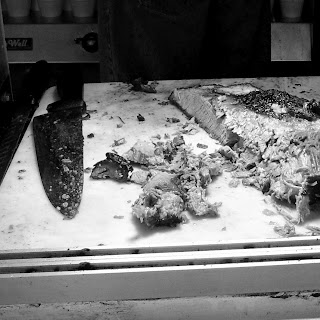 Now for the good stuff. They absolutely smash the pork here. The ribs were perfectly done. The meat clings half willingly to the bone, before it gives way to your teeth. Again, a delicate bark on top cloaks the dark pink smoke ring and welcomes another bite. The pulled pork is loaded with a plentiful mixture of ropey meat, buttery fat, and flavorful crust. Topping the whole thing off is an ever-so-slight dusting of rub coax out any flavor that may have been hiding. The sauce was thin and spicy with a good balance of sweet and spice.

Clearly a master practitioner here. Without the aid of temperature control - which I am guilty of - he cooks some fabulous meat, that is the most impressive thing to me. The product they turn out is of high quality, the flavors are well balanced and have been obviously been tuned over a long period of time. 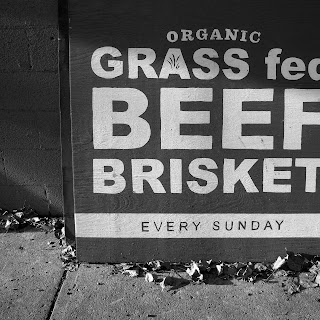 Erin at Harvest Pizzeria said they have a grass fed beef brisket they serve on Sundays. There's a sauce that goes with it that it is supposed to be outstanding.  Her advice was to get a little extra. Be warned though, this is about the worst kept secret in Columbus. In fact, my wife saw a girl she knew that lived in the area and they got on the subject of food. Right after my wife mentioned I'd been to Ray Ray's, the woman's eyes lit up and she asked if I'd been there on a Sunday for the brisket. I'm admittedly intrigued.

So there you have it. Be forewarned that these guys are only there Friday thru Sunday. As you can see they don't have an army of warmers to keep a bunch of meat laying around. When it's gone, it's gone. I've always believed that barbecue is best at lunch time. There's a pretty good chance that they haven't run out of anything yet, and you're probably getting meat that is freshly cooked.