Underdog? No. Not Well Known? Yes. 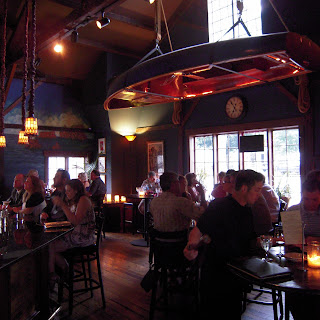 The Interior of the Former Sail Shop

Chez François is my favorite restaurant in northeast Ohio. Mind you, it is on the very, very western edge of the boundary, but as far as I'm concerned the Chez squeezes into the NEO. While I wouldn't describe myself as necessarily being a francophile, I do have a deep appreciation for well crafted, well thought out food.

But this is not an ode to Chez François, it's a love letter to his little brother Touché.

Housed in a former sail shop that is now the upstairs of Chez François, the bar area is known as Touché. Two-Chez, get it? This charming little bar offers up the crafty food of the more formal downstairs (jackets required), with the flip flop wearing people upstairs.

There are no reservations, which could be a turn off for East Siders (like ourselves) who made the trek all the way out here for dinner. It should be noted that after school starts, there is less of a risk of the place being packed on a weekend night. In the dead of summer you might be waiting a while if you arrive after six.

They offer a prix fixe menu as well as a variety of smaller type plates that are either suitable for sharing or can be ordered as entrees. I opted for the Panini Croque Monsieur ($12.95) and the Pommes Frites, Poutine ($8.95). The Croque Monsieur was not in its typical "fork required" form, but rather a sandwich that was able to be picked up and eaten with your hands. The frites were top with an addictive wine sauce and generously covered with Roquefort cheese. 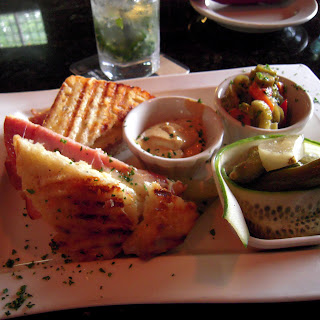 
Regina actually cherry picked an Alaskan Salmon dish off of the prix fixe menu that they charged $15.95 for. She was very happy with the dish itself, noting that the portion size was just right for the price.

The wine and specialty drink selection here is much more diverse than that of the beer. Since it was such a beautiful summer day, I actually passed up the beer all together and opted for a couple of mojitos.

Touché is a great night out (totaling $66 with tip). I've always found the service to be friendly and professional. I can honestly say that I've never had a bad meal in either the bar or the restaurant.

Most people dis it because they say it's too far to drive. I can't say that I'd really argue with that. What I will say, is if you want superlative food and service without the need to get dressed to the nines, Touché should be on your radar.