To some degree I think food trucks are given a little leeway when it comes to quality and the price of what they sell. The novelty, to some extent, seems to tip things into "I'll give them the benefit of the doubt" or "they have limited space so it's good for what they have to work with" territory.

The Cool Haus ice cream truck pushes both of these notions to the limit. 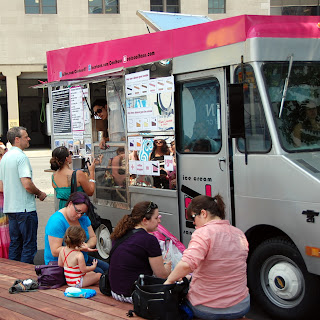 One of the Best Food Truck Designs


Cool Haus gets above average marks for website, concept, truck design and innovation. As far as taste goes - it absolutely sucks. Sorry, I'd be horrified if I went to an ice cream shop and they served this stuff to me for the princely sum of $5 a piece, or whatever they were. 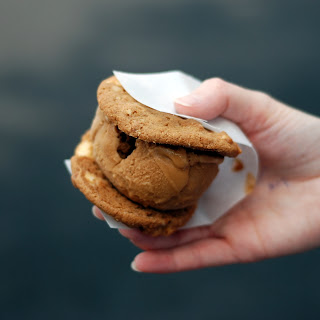 You can eat that wrapper, but it tastes like the photo cake film


I give them credit for the edible wrapper. I think that's a novel idea. But let's think about this. If I just hand you my dirty ass $20 bill and you gave me back my dirty ass change (with my bare hands), do I really want to eat the wrapper that is having money shmutz rubbed into it? Perhaps a paper wrapper would have been a better idea.

The ice cream is heavy on the "ice" and short on the "cream", if you get what I'm saying. Hard as a rock. Refrozen ice cream completely sucks. What could make it worse? How about sandwiching between over baked brick bat cookies?

This was extremely difficult to eat. So much so, in fact, that we tossed them both in the bin after about three bites. The rigid cookies forced the ice cream out of the sandwich like a rock hard turd.

I think to some extent people will say that it's awesome simply because of the novelty. While I don't love the Van Leeuwen ice cream truck, I think the product they sell actually decent ice cream.

To read some people's opinions - Cool Haus is absolutely awesome. With all the good gelato shops in NYC, I just can't get behind what Cool Haus is selling.