I emailed a friend of mine about meeting for dinner since I was going to be in the New York Metro area for business. She told me she wanted to keep it under $20 for an entree. Since I pretty much spend more money on alcohol than on dinner anyway, it was fine with me.

I had just recently been telling someone about my trip to Ippudo last month. Although they had never been there, they did say the ramen at Zuzu Ramen in Brooklyn was very good.

Not really feeling like making the trek into Manhattan and the fact that my dining partner would be within walking distance of Zuzu Ramen (in Brooklyn) - I figured it was worth a shot.

The restaurant is housed in a little corner unit, with about 20 or so seats inside. The decor is a mixture of reds and tans, and has these surprisingly comfortable "butt hugging" stools. I know they were comfortable because I ate and drank there for some 2 1/2 to 3 hours and never felt like I need to stand up and stretch.

We decided to share an order of the mini pork buns, along with a Garlic Soy ramen for her, and a Zuzu ramen for me.

I can say that the ubiquitous pork buns were probably the highlight of the night. If there is a list of fad foods, the cupcake is still miles ahead, but the pork bun is steadily gaining on them. Granted, I've eaten my fair share of these little treats over the last few years. I'm not going to pretend like I haven't, but this just might be the best pork bun I've ever had. The Zuzu version isn't just a simple slab of braised pork with hoisin wrapped in what equates to white bread-like dough. I would say that they taken that idea and topped it with some finely diced accoutrements that deviate from the traditional, but some much needed crunch and texture. I would order these again in a heartbeat.

The ramen is another story. First lets start with the broth. I thought it was way too one dimensional. I had gone to a couple of places in Hawai'i where I could have drank straight broth and walked away perfectly content. Ippudo, I think, takes broth to the next level and even blows the ramen-ya in Hawai'i away. A cursory survey of Yelp and Urbanspoon had consistently harsh things to say about the broth being too salty or smokey. For me I didn't think it was overly so, I did think there was a lack of depth that the previously mentioned places had. I don't mean to sound like it was bad - it wasn't. I just didn't feel the overwhelming desire drink empty the bowl. 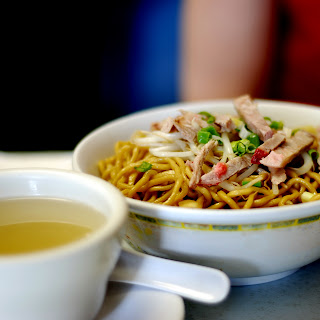 
I have found that many people bitched about the noodles, I happened to really like them. Zuzu uses what I've known to be a "cold noodle" that seems to have a firm springiness to it that I really like. I ate a place called Sam Sato's in Maui that did cold noodles with a dipping sauce and these were very similar. These are not the vermicelli-like noodles you see at most ramen-ya. I quite liked this incarnation at Zuzu.

My biggest problem was the size of some of the ingredients in the bowl. When our server, who was very friendly and attentive, brought out the bowl, I was surprised at how large the piece of char sui was. Looking down at the bowl, the slice of pork was was a shade under the diameter of the seven or eight inch bowl. How the hell do you eat that without looking like a wolf from a National Geographic episode? I'm all for more meat, but damn, cut the shit in half so I don't look so "primal" while I'm eating it.

For whatever reason there is an entire baby bok choy that is cut in half vertically and put in the bowl. This I have never seen. Instead of a wolf this time you end up looking like a rabbit with no social grace. There is simply no good way to eat it. The tough bottom portion is hard and inedible while the top has the consistency of wilted spinach. The fibrous nature of the ingredient is difficult to navigate with only a pair chopsticks.

Overall, I thought the food was good. It's not the best I've ever had and it's not the worst. Hardcore ramen fans are probably going to say it's decent. Others that are less familiar may say it's better. The problem is that they charge $10-$15 for their ramen, so the bar is raised pretty high. Like a $20 burger, the more you charge the higher the expectation. I don't think Zuzu ramen meets their price point.