When we were in Hawai'i last January I was in ramen-ya heaven (Goma-tei, Tenkaippin in Honolulu, Sam Sato's and Noodle Star in Maui, all of which I have failed to complete posts on). With the heavy Japanese presence on Oahu, Honolulu in particular is a an izakaya hot bed.

When I go to New York, ramen is not really a huge priority for me. New York City is not Honolulu. This tiny Hawaiian island does Pacific Rim food exceptionally well - there's really not much reason to eat a whole lot of anything else. But New York? Wow. You can pretty much point at most any cuisine and there will be at least two or three practitioners of that particular genre who are held in high esteem around the world. Until the last few years the lowly ramen has languished in relative obscurity among the city's endless bounty of restaurants.

That is, until Japanese powerhouse Ippudo NY decided to open its only US outpost in this dining Mecca.

The New York leg of our East Coast trip was purposely left with loose dining plans simply because we knew that we were going to be eating an insane amount of food in Philadelphia. 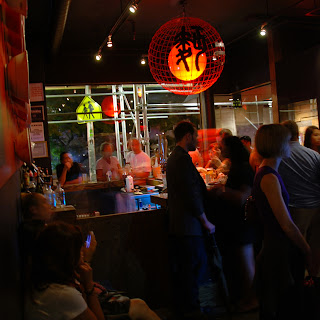 
While walking down through the the East Village, I noticed a lunchtime crowd of predominantly Asian people gathered around a front entrance passing time with their cell phones. With a crowd spilled out onto the sidewalk on a Friday afternoon at two o'clock, this had to be something good. Had it not been for the people outside, I would have walked right past it. With scaffolding obscuring the view of the packed bar area inside, there really isn't anything that lets you know that you have happened upon anything of any note. These people were waiting to get into Ippudo. A quick search on my phone reminded me that I had read about them once (along with nine million other "I have to try this place the next time I go to _____" restaurants. 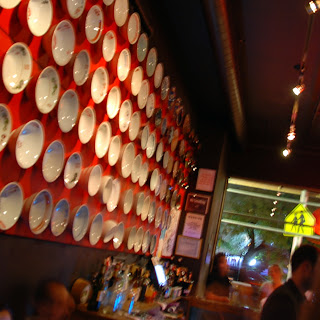 
Since Regina and I had structured things so that we were flexible for dinner, Ippudo's "no reservations" policy was going to be just the ticket for the two of us. When we called at about 7pm the hostess said that the wait was about an hour. She said they'd take our name, quote us a time once we arrived, and even text when our table was up. By the time we got to the restaurant the wait had grown to an hour-and-a-half. Since we weren't really interested in eating dessert there, we decided to put our name down and go chase down some after dinner treats to take back to the hotel.

We walked down to Sugar Sweet Sunshine for pistachio cupcakes, Bisous Ciao for a sampling of macarons, and a few more macarons from The Dessert Truck Works for the infamous NYC Mini-Macaron Crawl. Okay, so maybe you're not into chasing down dessert, but there is no shortage of bars or coffee shops to pop into while you wait for your table to open up.

With desserts in hand, our table was ready. The music is fairly loud, but not so much that you can't hear your server or the people who are sitting next to you. We sat at a two sided bar that is located near the back of the restaurant. The kitchen is an L-shaped affair with low counters that offer a glimpse into what's being made and sort of how they do it.

With the Big Apple BBQ Block Party coming up the next day (and a bag full of desserts), we didn't want to order too much food and have to throw any away. I immediately zeroed in on the Akamaru Modern ($15)- The original "Tonkotsu" noodle soup (a pork based ramen) topped with Ippudo's secret "Umami Dama" miso paste, pork chashu, cabage, kikurage, scallions, and fragrant garlic oil. (Nitamago - Seasoned salt boiled egg $2, Kakuni - Braised pork belly $4 are suggested add-ons. Both of which I exercised my option on.) 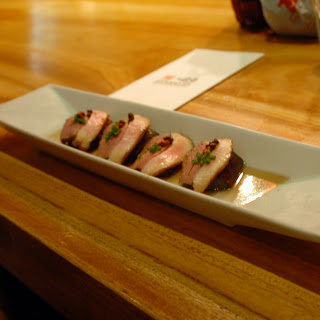 
Regina wanted a little of my ramen along with an order of the Kamo Roast & Nasu Nibitashi ($12) - Japanese style simmered roasted duck and eggplant in a chilled dashi broth.

Let me start by saying that the broth in the ramen is one of the most luxurious bits of liquid richness that has ever touched my tongue. In all sincerity, I thought the broth at Goma-tei was about as good as it gets - no it gets better. Screw the egg, the pork belly, and all the other stuff - the broth is so complex, yet harmoniously satisfying, you don't even need the egg or the pork belly (I didn't say I didn't want them - that you didn't need them). Adding the vermicelli-like noodles, a touch of spice, and all of the other stuff and....well....you've just got to try it for yourself. Make sure to order Kae-dama (extra noodles) for $2. For this nominal amount the waitstaff drops an extra serving of the noodles in your bowl to use with any remaining broth.

Regina's Kamo Roast & Nasu Nibitashi was a very clean and simple dish that laid out the bare elements one on top of the other. Regina is very sensitive to spice and slide off the little dab of whatever was on top. I love spice so she just added it to the pieces I ate.

The food here is well crafted. I'd even go so far to say that it is something you have to see (or taste) to believe. As with many things (barbecue, pizza, etc.) I'm sure there are those that would downplay the merits of Ippudo. Regardless of whether you like it as much as I did, I think it's safe to say that you could do far worse and at the very least a must visit at least once.

The interior design is very sleek. The servers are very patient and friendly. The food is very memorable. In terms of ramen-ya in the US, Ippudo may just be ramen heaven.

Looking for more stuff in New York City? Check this link for our NYC Page.