I bought a couple packs of the Tea Hills Farms chicken wings last week at the North Union Farmers Market at Shaker Square. I prefer these mainly because they're pretty small and already cut into drumettes, mid-point wings, with points removed.

I've had some onion rolls from Zingerman's Bakehouse that have been sitting in the freezer forever. Remarkably enough, once thawed these things have held up really, really well. With some melted butter and a spell in the skillet, it's go time with a nice crisp.

I had bought the wings with the intention of smoking them, but decided I wanted to make a sandwich out of them. The logical question would be, "Why?"

I'm a sucker for skin. I love pork cracklins, chicharrones, turkey skin, chicken skin - it doesn't really matter. I like the way it tastes. I like the way it sounds between my teeth. I think South Carolina is still trying to recover from all the cracklins I consumed last April. However, a wing roasted in the oven is much different than one smoked in a cooker. When smoked, the skin tends to dry out a little bit and takes on a little more chew than I like. In an oven it seems to crisp up really nice. When you pull them out you can see that fat bubbling under the translucent skin. 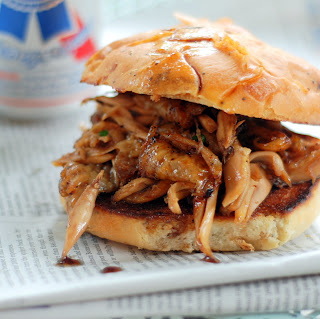 
Add the vast outer surface area of a wing (as compared to the skin:meat ratio of say a chicken leg or breast, and you have the beginnings of a great sandwich. Toss that with the Blackberry Soy Glaze and you've got fun on a bun. The small shreds of wing meat are a lot like a pulled chicken sandwich only there's copious amounts of skin deliciousness on board.

I took the recipe from The Big Bob Gibson's BBQ cookbook and instead of using the smoker - cooked them in the oven. Once the chicken has cooked and cooled down a little bit, I picked the meat off the bone and tossed it with the glaze (which is also in this post). Butter up you favorite bun (in my case a New Yorker poppy seed roll with a pocket of slow cooked onions inside from Zingerman's Bakehouse, and toast it on a griddle. Put chicken to bread. Grab an ice cold beer. You're good to go.

Looking for other desserts? Check out our Food page here with a complete listing of our past creations. Enjoy!