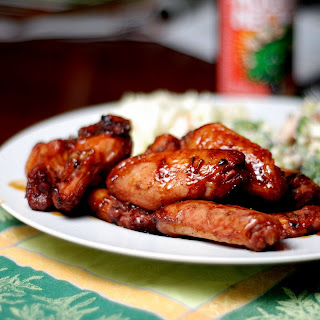 
Anyone that knows me has a pretty good idea that I love my Big Green Egg. For the home barbecuer I don't think ease of use gets any better. Since getting the BGE this past winter there has been a decent learning curve. On the whole I'd say most of the issues I've faced have been controlling the pit temperature. With the help of the BBQ Guru, most of the temperature issues have been ironed out. (A post in the coming days will address some of my favorite tools for cooking out.) I'm now able to carry a high consistent temperature without too much BS. The BBQ Guru takes care of stoking the fire while you can concentrate on everything else.

These wings are about as easy as it gets - once you get past maintaining your heat. This recipe is a fantastically easy weekday dinner. It's a low fat recipe that's long on flavor and cheap as hell to make. I typically make a batch of the glaze and store it in the fridge for up to a month. This, like many of the recipes out of the Big Bob Gibson Cookbook, are easily adaptable to free-styling. (If there is one "must have" barbecue book, this is it.) From building the fire to cooking the wings (if the glaze is already made), this recipe will take you about an hour.

Before you do anything make the glaze first!

Ingredients:
In a small saucepan, combine all the ingredients and mix well. Place over medium-low heat and simmer for 30 minutes, stirring occasionally. The sauce is ready when bubbles rise to the top of the pan. Remove from the heat and set aside until needed. After cooling, transfer to a tightly covered jar or plastic container and store refrigerated for up to 2 weeks. Serve immediately or reheat before serving. I keep it for up to a month and haven't died yet.

Dry Rub
Stir together the dry rub ingredients in a small bowl. Season the wings with all of the rub for extra-hot wings or half of the rub for spicy. 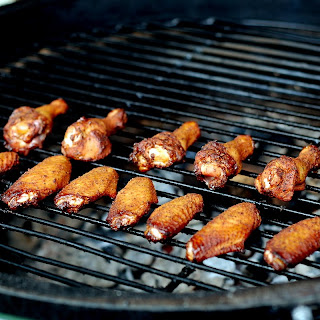 The wings are all pointed in the same direction


When the wings are brown and crisp, remove them from the grill and drizzle with warm Caramelized Soy and Blackberry Glaze. (I prefer to toss them in the glaze so it doesn't run all over the plate onto my other food.) 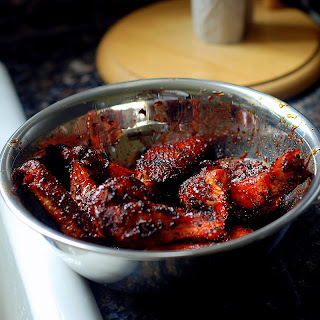 Glazed tossed with wings and ready to go