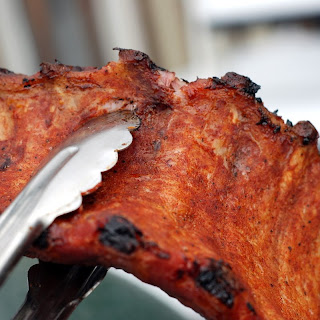 Another hour should do it.

I'll take that old adage one step further by saying, "Where there's smoke and fire, there's most likely a group of men nearby swizzling beers and cooking meat."

We're getting to that part of the winter/spring (whatever you choose to call it here in NE Ohio), when men (and women, but mostly men) across the land start to get that urge for a more primitive kind of cooking. Weber grills sleepily rub their eyes as they're rolled out the garage from a long winter nap. Hardware and home improvement stores switch over displays from snow blowers to gas grills and charcoal pits in hopes ensnaring impulse shoppers.

These weekend warriors range anywhere from the fanatical (that would be me, my grill did not get any sleep this winter), to the occasional hot dog and burger griller. It doesn't really matter if you grill or if you barbecue, and there is a difference, various opportunities across Northeast Ohio exist to expand your outdoor cooking horizons.

I've compiled a cursory list of barbecue and grilling classes that are quickly filling up at various locations in the area.

This first class I've actually been to. I can personally attest to the amount of knowledge visiting instructor Chris Marks shares and the quality of class put on by the folks at Heat Exchange Hearth & Patio Shoppe, in North Ridgeville. I went to the Ribs and Chicken class last year and it was an absolute bargain at $75. Like last year, Ribs and Chicken is a longer in depth class on Saturday. I'll be attending the Loin/Tenderloin class on Friday night ($50). Make sure to bring your camera so you can get your picture taken with me, I don't sign autographs!

Seriously, if you have any interest in going to this event at Heat Exchange on April 29 0r 30, I'd call now. Since the class is listed on the KCBS website, there are a number of out-of-towners that attend. I find that I learn as much from the students as I do the instruction. I happened to be seated at a table with a husband and wife that had the same cooker I did and we traded secrets. The students attending were pretty hardcore and asked a lot of really good questions. It was an absolute blast. Click here for more details.

I would say these other classes are geared more toward those who want to cook with fire more so than smoke. Judging by the descriptions I'd say they're geared more toward the grilling end of the spectrum more than barbecue. I've personally taken at least one class from Western Reserve and Paganini and felt that they both gave me what I paid for.

I haven't taken any of Viking's classes, but have heard that you have to be clear on whether it's a demo class or a hands on class. The Barbecue Basics class is classified as a workshop, so I'm guessing that means hands on. The class on April 10th runs from 6pm-9pm and is almost sold out (I told you people were getting the itch), so again don't wait. Click here for more details.

Western Reserve School of Cooking in Hudson has the Outdoor Grilling Series for $312 or $80 for an individual class. The series consists of Grilling 101, Perfectly Grilled Seafood, The Right Cut for Grilling, and Ribs, Ribs, and More Ribs. These classes run on dates in April and May. Click here for more details (scroll about three quarters of the way down the page).

The Loretta Paganini School of Cooking is putting on The Barbecue & Grilling Boot Camp for $195, on May 14th. This is another class that is nearly sold out. LPSC is offering an 8 hour monster of a class that sounds like it's actual barbecue focused. (I'm always leery of barbecue classes that run three hours. What are you going to smoke in 3 hours? Chicken tenders?) The length of this one leads me to believe that low and slow is going to be the order of the day. Two kinds of ribs, pork shoulder, beer can chicken, smoked salmon, and brisket will be the taught.

I realize Old Man Winter is not easily loosening his grip on the weather here in Cleveland, but before you know it there will be leaves on the trees, sunshine on your shoulders, and smoke in the air.
Posted by Dine O Mite! at 8:11 PM