One of my resolutions was to go places and do things I always said I wanted to try. In fact, if you've been reading lately, you'll find that most of the spots I've been going to are places that don't exactly resemble the latest and greatest in restaurant openings. Some places are popular, some are not, but I think it's safe to say that it beats going to the old standby for the tenth time in three months.

After deciding that cooking dinner wasn't in the cards, Regina and I settled on trying The Osteria or Osteria Cedro Rustico, as it's apparently called.

Located inside the Whole Foods on Cedar and Warrensville Center Road, between the produce department and beer and wine section, an arc of chairs ring the counter space. In the middle sits the cooking area where everything is prepared by two cooks. 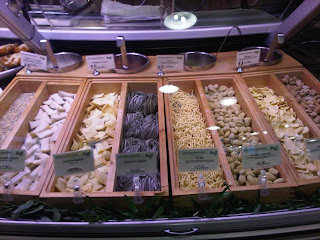 
A selection of fresh made pasta is displayed in a case for you to choose from. Once you've selected what you'd like, the pasta is then cooked to order. Regina got the spinach linguini with Parmesan, eggplant, and caramelized onions. I settled on the short ribs and mashers (no pasta). 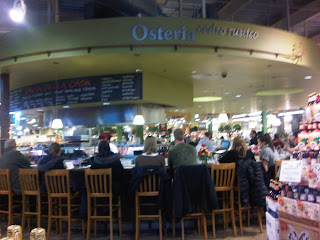 
I wasn't sure I was really going to like eating dinner while customers passed by shopping, but the partition around the seating area seemed to create enough of a barrier to where you didn't notice any commotion. The conversation around us was quite lively, too. As my wife and I talked about Top Chef from the night before, the cooks joined in with their opinions. The next thing I know, the two women sitting next to us joined in, and then - the food was ready.

Now I'm not going to sit here and act like the short ribs here are going to cause Rocco Whalen to look over his shoulder anytime soon, BUT the short rib dinner I had also came at about a third of the cost of Fahrenheit's. We felt that for what we paid, it was certainly a good value. Would my dad complain? Probably, but then again he still thinks a coffee should cost sixty cents. Middle aged men aside, I think most people would find the menu here pretty reasonable.

I think Osteria puts out a quality product at a decent price. It may be a restaurant inside of a grocery store, but it shouldn't be mistaken with the old Marc's No Name Restaurant, in Parma Heights.