It's Saturday night and my dad smells like aftershave (which I personally have never used), my mom is rockin' the latest fashions from Summit Mall, and I (along with my brothers and sisters) am waiting for Silver Spoons to start. Sandwiched somewhere between Silver Spoons and Diff'rent Strokes, would be the arrival of the evening's dinner.

The Saturday night tradition, at least in our Medina home, was that we always ordered Rustic Inn pizza - one pepperoni and sausage, and one mushroom and peppers. Sadly, Rustic Inn has since gone to Jesus. The pizza of my childhood may be gone, but I'm sure the Saturday night preteen pizza tradition continues across this great nation. Every weekend the children are paid in pies, whilst mom and dad savor their ever-so-brief evening respite from chaos.

My gut tells me that many of the children in Hudson share this very tradition with the "Saturday Night Pizza" at Great Lakes Baking. You see, this bakery is your everyday bakery by day (six days a week, closed on Mondays). However, on Saturday nights they make pizza for carryout. 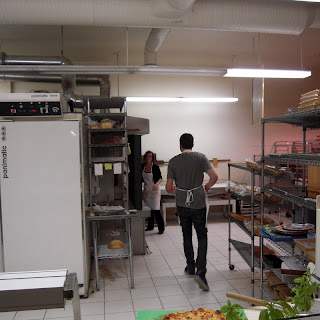 
For me it's all about the pizza quest. Pizza of my youth is for the most part gone. (I consider Antonio's my adopted pizza of my youth, since I made a beeline for that place every time we went to Parmatown Mall. Don't laugh, there was a point in time when Parmatown was the shit. Seriously!) At any rate, I happened to be kind of in the neighborhood (Northfield), so I figured this was one of my rare chances to pick up a Great Lakes Baking pie.

I called and ordered a pepperoni ($13), while I drove in that direction. If I'm ordering Neapolitan I'll typically order a margherita pizza, anything else and it's either pepperoni, or pepperoni and sausage. If you do order over the phone, ask what their special pizza is. The price is typically more, but there's usually some pretty good combinations. I missed out on a blue cheese one that had my name written all over it. 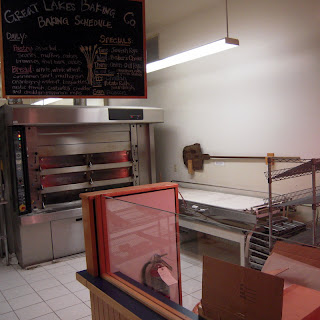 The staff, as far as I could see, was mostly teenagers or young twenty somethings. You could tell they clearly enjoyed making these pizzas. The kid that was putting them in the oven was pretty amped about my interest in what they were doing. There are a couple small round tables with a few chairs for those who want to eat it at the bakery. While there were people eating there, I'd probably get your pie to go. It's true that the bakery doubles as a pizzeria quite nicely, but they don't have the trappings that one would typically like with their pie (soda, beer, apps, etc.) 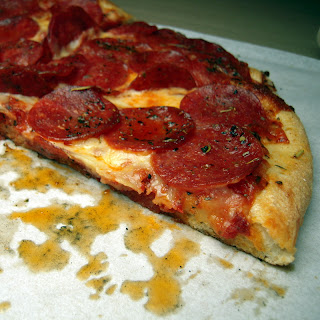 
As you can see, the pepperoni is not the stereotypical low end stuff you find at most run-of-the-mill neighborhood pizzerias. They sprinkle a moderate amount of seasoning on top that really adds a some extra oomph to the spiciness of the thick pepperoni. GLB offers a Rustic French and a Whole Grain crust. I opted for the French along with the red sauce (white and pesto sauce are also available). Thankfully, they don't go nuts with the cheese or the sauce. As the picture shows there's a pretty good balance of dough, sauce, and cheese that results in a chewy crust with a slice that is not overly greasy.

My verdict? Great Lakes is on the right track. The kids that work there seem to be very excited about the crafting of these pies. I liked what I ordered, but I think next time I'd go with their specialty pizza. The pizza is solid and probably serves up one of the better pizzas in Hudson. (I'm not familiar enough with the pizza around there to say for sure.) That being said, I don't know if it's worth making a special trip from afar to get, especially since it's basically carryout only.