The Zilla is a Thrilla! 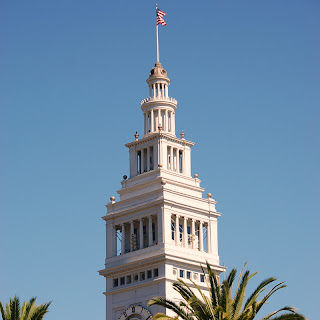 I think as a child everyone has an image in their head as to what communion tastes like. The Catholics believe it is body of Christ.

Wrong. If I was served bread like that at a restaurant - it would be sent back. Who came up with the recipe? Better yet, who said, "That's it. That's the master recipe, dude! Every Sunday for the rest of your life - right there!"

Obviously the whole thing can be a bit confusing for a youngster. The bread doesn't actually taste like bread. And the idea of taking a Christ, popping him in your mouth, and then chewing on him can be a bit unsettling.

So what did I think it tasted like? As a casual observer one can see that the host is this light and airy sort of disk. In fact, there really isn't much taste to it all. *Darn!*

It took me until my thirty-eighth year to finally figure out what I thought the body of Christ should taste like - the chicharrones from Ryan Farr at 4505 Meats!

I had heard rave reviews about the 'Zilla Dog at the 4505 Meats stand at the Ferry Building Farmers Market. Since it is my duty to hunt such things down, I slapped my money down and walked away marveling at how I was going to attack this beast. 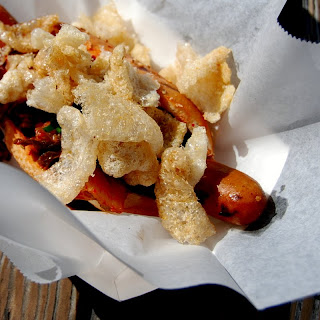 The 'Zilla is a Thrilla


The 'Zilla Dog consists of an uncured bacon filled hot dog, topped with kimchi, money sauce, and the body of Christlike 4505 chicharrones. Let me start with the hot dog. I'd be interested in trying the dog on its own just because the deliciousness of the other elements overshadowed it. The kimchi was not the rough cut clumsy stuff you typically see people serving - the rendition served here is cut into thin strips similar to that of a cole slaw. Thankfully they utilized the leafier parts of the cabbage which didn't take up a lot of space. The money sauce is....well...money. I lost the notes on what was in it, but it's very complimentary to the whole creation.

....and then there's the chicharrrrrrrrrrrrrrrones. (You damn well better be rolling your tongue when you say it, too.)

If you order pork rinds, chicharrones, cranklins, whatever you want to call them, they're typically dusted with some sort of spice and then served. (They're also usually very obnoxious in size.) Like the kimchi, these were cut into a scalable size relative to the hot dog (one inch strips that were no longer than maybe three inches ) -very bite sized and easily eaten. But the flavor of these were unlike any I'd had before. It was a very subtle combination of sugar and seasoning. They hit your tongue and then seemingly melted away.

After finishing the dog I made a beeline for the individual bags of porky deliciousness and savored them one at a time. As I sat and watched the stroller tide roll into the market and gum up the foot traffic, I thought, "Damn, now this is what communion should taste like!" 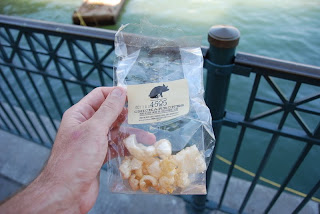 
If you're coming to San Francisco make sure you check the website to see what classes he's offering. I missed a sausage making class by two days that would've been awesome to go to. The farmers market is only on Thursday and Saturday, so make sure you set aside one of those days for lunch plans.

If you'd like to buy some of the 4505 chicharrones or even the hot dogs, Bi Rite Market sells them.