Ask most people around here to name a native Clevelander who has won both a James Beard award as well as made a headline appearance on Iron Chef, and most will tell you Michael Symon - which would be correct. But if you asked them to name the second one they might not know who you were talking about. I can't say that I'd blame them since he hasn't worked in this town in quite a while. This person is, of course, Andrew Carmellini.

I'm not going to go into too much detail, since I've raved a few times before about this guy. He heads up the venerable Locanda Verde in NYC and wrote a cookbook aptly named Urban Italian. I've attached a really well done article that goes out to all Padua alumni (my wife). It's a very well written article with references to Dante Boccuzzi, some Cleveland restaurants, and in one of the photos is Shaker's own Karen DeMasco (Craft of Baking and creator of the unbelievably awesome Maple Budino).

If you haven't picked up Urban Italian, I suggest it even if you just read the stories. There's a tale that involves the Italian countryside, mushrooms, and prostitutes that is priceless. Besides telling a good story, AC can write the hell out of a recipe. I made these pork chops a few years ago and just love them.

I have to say that I'm very excited about the news of the new restaurant opening next month (The Dutch), as well as the upcoming cookbook (American Flavor).

I know it's hard, but try not to hate on him for the Yankees cap (one of the pictures in the article). 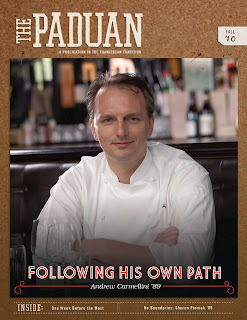