Make sure to check here for more San Francisco posts

There was a time that you could count on one hand the number of establishments cranking out wood fired Neapolitan pizza. In Peter Reinhart's book American Pie the only Neapolitan that is referred to is Pizzetta 211. [It should be noted when I took Reinhart's class back in June he said it probably wasn't worth the trip to solely try the pizza - they aren't exactly located in the thick of things.]

In Ed Levine's book Slice of Heaven, exactly three San Francisco pizzerias are mentioned (A16 which was closed for remodeling, the previously mentioned Pizzetta 211, and Tommaso's which didn't exactly get a ringing endorsement by Levine).

As I looked at the travel map that we had been compiling over the course of the last year, I found myself saying, "For a place that doesn't have much in the way of pizza, there sure are a bunch of pizza places on this map." Our first stop was going to be Tony's Pizza Napoletana. 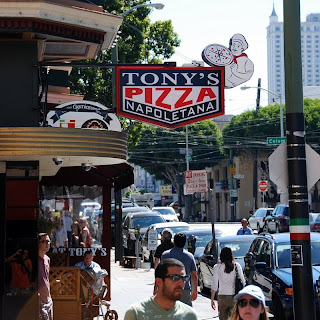 Apologies for the lame picture. I accidentally erased the originals.


Tony Gemignani's restaurant is actually right next door and connected to Tony's Coal-Fired Pizza and Slice House. Between the two establishments he cranks out like five different styles of pizza (Classic American, Classic Italian, Roman, Sicilian, and Napoletana).

For me the attraction was that Gemignani had actually won the 2007 Best Pizza Margherita in the World Pizza Cup in, get this, Naples, Italy. He was the first American and non Neapolitan to ever win the award.

We arrived in San Francisco just in time for lunch...well....maybe the ass end of lunch. Since there wasn't a whole lot of eating going on during our morning flight, to imply we were starving when we landed would be an understatement.

We dropped our bags off at the the Le Petit Auberge and headed straight to North Beach (thankfully all downhill), to Tony's Pizza Napoletana. The restaurant ended up being about half a block from the hotel (Washington Square Inn), we stayed at the last time we were in SF.

The restaurant itself is certainly a casual place that welcomes both locals and tourists. The walls are lined with subway tile and the interior is tastefully decorated. There were thankfully no kitschy murals of Old Napoli painted on any of the walls. The restaurant is bisected by a wall, the wood fired oven and pizzaioli are on one side, the entrance and bar on the other. I would try to snag a table on the oven side of the restaurant.

As sacrilegious as it is, my wife is averse to pizza margherita. We wanted to order the truffle pizza but fell victim to the small window between white and black truffle season. They were willing to give us a pizza that was "truffle-esque" (sans truffles and instead drizzled with truffle oil) at a greatly reduced price. We instead ordered the New Yorker (muzz, hand crushed tomato sauce, pepperoni, sausage, ricotta, chopped garlic & oregano).

Since I lost out on the option to get the margherita I felt the abundance of toppings kind of overshadowed the dough. If there's one thing I noticed it's that Tony's garlic, whereever the hell it is from, brings the spice. I can't say for sure how much water I consumed that day, but the garlic was certainly whipping my ass all the way up to dinner.

The cornicione is texturally spot on. Each bite offers a soft pillowy mouth feel, with the light crisp that you would expect from being cooked in the high heat of a wood fired oven. My only criticism is that the dough hand a touch of blandness to it that I wasn't quite expecting.

My overall impression is that Tony's is certainly a worthy pizza destination. I found that the numerous pizza spots that I would stop at in the coming days would be as successful in putting together the total pizza like they did here at Tony's.

If you are putting together a pizza map (and I suggest you do), or even just a San Francisco eating map (which I also suggest you do), Tony's Pizza Napoletana needs to be put on both. I just wish I had more time, and stomach room to try the other four types of pizza.