Sorry, but this isn't a post about a guy robbing a bank to fund a sex change operation. (Attica! Attica! Attica!). I'm actually writing about the beloved tube steak.

Back in my b cup days I used to order these things by what seemed like the gross. As my waistband continued to expand it became increasingly obvious that I needed to cut things back a little. So I did - big time. Bread and red meat (among other things) were cut out of my diet while I started the march toward the coveted 34 inch waist.

Forty-five pounds later (that's another post(s)), I began to include the beloved hot dog back into my diet. I prefer to have one at lunch time when I'm running errands. My new rule is that I can only get one. While I'm not Kobayashi, I can down three or four without even thinking about it. Here are a few places (not including my experience at Tucky's) that I've stopped at on the west side.

Since I happened to be over in this neighborhood to rummage through the wares at Antiques in the Bank - awesome selection of odd ball house parts - I figured I'd stop in at Old Fashion Hot Dog. This is one of those places I usually drive by, but have already eaten so I keep on driving. Since I hadn't had lunch I dropped in. OFHD is old school. I'm guessing it looks very similar to the way it did thirty years ago. I'm not implying that it's dirty or ugly, it's just a popular breakfast and lunch counter that serves its local neighborhood. The hot dogs, hamburgers, fries, etc. are nothing fancy it just a straightforward, middle of the road dog that isn't boiled or sitting on rollers. Friendly service, cooked on the flat top, that'll be $1.25. 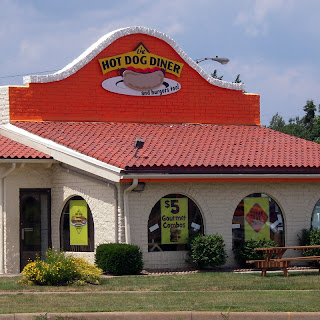 The right window looks like it says, "Cheap Fat Zone"

This was another "in the neighborhood" stop. Located in an an old Taco Bell just west of the Ridge and Pearl Road intersection, Hot Dog Diner has a large variety of different hot dogs, hamburgers, and soft serve flavors. The dogs are very reasonable in price ($1.07 for your regular, $1.99 for the jumbo, $1.99 for a corn dog, another "Calvin the Fatty" favorite. I am a corn dog whore.) They have crispy, non-soggy fresh cut fries.

If there was one thing I didn't like it was the soft serve. I ordered the malted cone. When took the first taste it just tasted like vanilla ice cream. If there was a malted taste I didn't recognize it, but that might have been because it went from it's semi frozen to liquid state in about one minute. This cone melted so fast I had to throw it in the trash. I'd go back - I'd just skip the ice cream.

I've actually been here a few times. In my opinion, Happy Dog has the best Hot Dog I've had in Cleveland. Their menu is simple: Hot Dogs (or Veggie Sausage) with your choice of as many of the fifty toppings as you want, Fries, Tater Tots and booze. That's it. The dogs are of the large 1/4 lb. variety. "B Cup Cal" would've eaten two of these with no problem. "Rational Cal" now realizes that one of these with an order of potato du jour and a beer or three, makes for a very satisfying dinner. I have to be in the mood to come here because I don't typically like eating a hot dog for dinner, but the twenty+ draught selection certainly has the power to draw me in. The toppings are also very good - I had the applewood smoked bacon and bourbon baked beans. I was skeptical (and still am) that these hot dogs would taste good with some of the toppings that are offered. Fruit Loops? Peanut Butter? Seriously? Well...."7 year old Cal" would've been all over that.