These little suckers are absolutely awesome. Mashed potatoes are about as generic as it gets. You definitely need a fair amount of time to make these, but in the end the reaction you get from your guests is well worth the effort. This is a wonderful potato option that doesn't include the word "mashed". 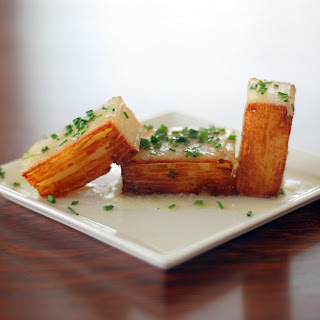 1. Pour the cream into a large bowl and season with 1 tablespoon salt and ½ teaspoon pepper. Peel the potatoes. Cut a thin lengthwise slice off one side of a potato so it will rest flat on the mandoline. Lay a Japanese mandoline or other vegetable slicer over the bowl of cream and slice the potato lengthwise into very thin (about 1/16 inch) slices, letting them drop into the cream. (If you can’t lay your mandoline across the bowl, slice the potatoes, adding the slices to the cream as you go.) Stop from time to time to toss the slices in the cream to keep them coated and prevent them from oxidizing. Repeat with the remaining potatoes.

2. Brush a 10 x 6½ x 3 inch high pan with half the softened butter. (Don’t use a shallower pan – need the depth this size pan gives the pave.) Line with parchment paper, leaving a 5-inch overhang on the two long sides. These extensions will be used to cover the potatoes as they cook and later serve as handles when unmolding. Brush the parchment with the remaining softened butter and sprinkle with salt and pepper.

3. Trim the potato slices to form a solid even layer in the bottom of the pan and lay them in the direction that works best to fill the pan. Repeat to from a second layer. Dot with a few cubes of butter and sprinkle lightly with salt and pepper. Continue layering the potatoes, adding butter and seasonings after each two layers. Fold over the sides of the parchment to cover the potatoes. Cover tightly with a piece of aluminum foil (to allow the potatoes to steam as they bake).

4. Bake the potatoes for 1 hour and 50 minutes, or until completely tender when pierced with the tip of knife or a wire cake tester. Remove from the oven and let cool for 15 minutes. Put a weight on top of the potatoes (see note), cool to room temperature, wrap well, and refrigerate for at least 6 hours, or up to 2 days.

6. Heat some canola oil in a large frying pan over medium-high heat. Add the potatoes cut-side down, add the thyme and garlic, and cook, basting with the liquid in the pan, until browned on the first side, then turn carefully and brown the opposite side.

7. Arrange the potatoes on a serving platter, browned side up. Put a small piece of butter on each piece to melt, and sprinkle with chives.