Macarons in Ann Arbor? Who Knew?

I’ll admit it. I wasn’t always the biggest fan of French food. Looking back, I think it stems in part from a bad experience my husband and I had at Charles De Gaulle airport in 2001 on a layover to Rome. We encountered some less than friendly Parisians, and we wrote off just about all things French (the exception La Chatelaine in Columbus; always was a favorite, always will be).Well, I now admit, that closing our minds to French food was a mistake. Somewhere within the last several years, we’ve discovered that the French aren’t so bad and they really know what they are doing when it comes to food. I’m not sure of the exact moment of our “epiphany,” but it’s fair to say that we can thank Chez Francois, The Perryville Inn, Eric Ripert and Jean-Georges for their contributions along the way. Now, believe it not, we actually talk about traveling to France.
So, imagine our delight when on a cold, blustery day in March while visiting Ann Arbor for the weekend, we happened upon a French woman selling pastries at the local farmer’s market. Despite the frigid temps, she had a steady stream of people snatching up all types of baked goods – almond cream tarts, eclairs, macarons, etc. We struck up a conversation with Cecelia and her husband, who happens to hail from Ohio. We discussed her background as a pastry chef, the farmers markets she frequented and most intriguingly, the pastry classes she taught through a local cooking school and at her home. We made a mental note of her website – www.ceceliaspastries.com. We bought a fruit tart and her last two coffee macarons.We made our way back to Cleveland and ate said macarons. We promptly fell in love at first bite and found ourselves quickly looking up her next scheduled classes. Unfortunately, a trip back to Ann Arbor would have to wait…until now.


My birthday present from my husband was a surprise – Macaron making class with Cecelia. I was nervous. Research I had done on macaroons revealed that they are hard to make and often end up in failure. Such simple ingredients…sugar, egg whites, almond flour are very formidable in the world of macarons. Those who know me will attest…I am not a fan of failure. I’m a perfectionist, hard on myself, etc. Upon learning of my gift, I told Cal that he needed to attend for me because he’s much more precise and better under pressure. However, in the end, I decided to suck it up and see for myself…with some guidance, could I be successful at making Macarons? It would appear, I couldn’t have a better teacher. 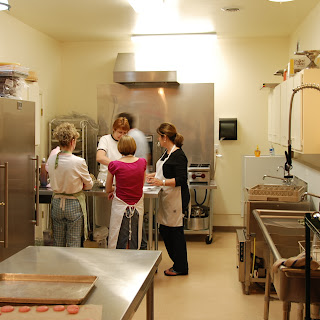 
Cecelia has a great set up for teaching classes. To the side of her garage, she’s built a modest sized kitchen for her own baking and teaching classes. She limits the participants to 2-4 people. Her approach for this class was to explain and show in detail how she makes macarons. She provided a very rudimentary recipe – the ingredients, the temp and the cooking time. She stated, in her darling French accent, that she’s added some of her own personal touches, such as using buttercream filling vs. ganache. Her husband was on hand to translate the few times she was at a loss for the right French to English translation to explain the process. Her husband was also available for a much more important task -cleaning up after us as we went along, constantly washing, drying and whisking items in and out of their industrial grade dishwasher. He was at the ever ready, understanding all too well that time is of the essence when dealing with such temperamental pastries as these.There were 3 of us in the class. Cecelia first demonstrated as we took notes and asked countless questions. Then, she let us loose to make the first set of macarons as a group. We chose vanilla. I was impressed with how well we worked as a team. Cecelia explained that macarons aren’t hard to make, they’re just complicated. There are a lot of little steps that go into the finished product and they need a lot of attention. She confirmed my observation that there’s a lot of gray when making them…they are not black and white. Personally, I’m a black and white kind of girl, so it’s understandable how such a little cookie could make me so nervous!

For our first batch, I’d say we did a decent job. The precision that’s needed to perfect piping and “breaking” the tops of the cookies only comes with a lot of practice. We produced a fair amount of “Hershey’s kiss” appearing cookies, but with some vigorous tapping of the pan, most of them faded away, and into the oven they went. 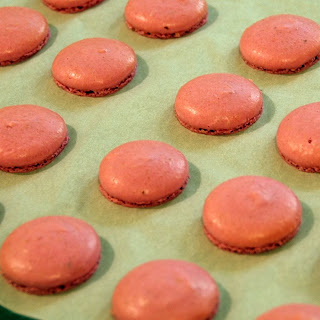 Ready to put together


Our final assignment was to each make our own batch. I chose coffee and my classmates chose raspberry and almond. We all feverishly worked to crank out our first solo batches, referring to the scribbled notes we had just taken and asking for reassurance as we went. Cecelia was often looking over our shoulder to offer advice and make sure we were on the right track. Once our cookies had formed the perfect crust and began to bake, she walked us through the flavoring of the buttercream and showed us how to fill them. The first example was the batch she made…vanilla buttercream (flavored with vanilla beans – no extract here!) with a rum soaked cherry sandwiched between the 2 cookie layers. We couldn’t eat them fast enough …light, chewy cookie and velvety smooth filling. We thought that they were perfect. However, Cecelia quickly commented to her husband that next time she would add 2 cherries to intensify the flavor and ensure a bit of cherry in each bite. 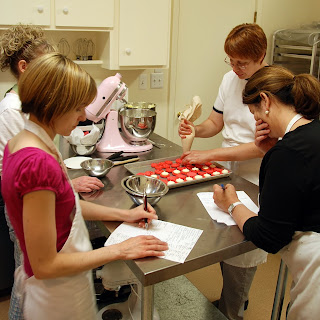 After making almond, coffee and raspberry buttercreams, Cecelia sent us off to our stations to finish our work. Again, once they were assembled, we couldn’t wait to try each flavor. The coffee, vanilla and almond flavors were intense. And good! The raspberry was certainly more subtle, flavored with several fresh raspberries.


In the end, we decided to share our creations amongst one another. Cecelia announced to the class that she better not see us buying macarons from her in the future because now we all know how to make them! We each went home with an assortment and being that class was from 6-9 pm, I ended up having macarons for dinner on the car ride home. I was on a bit of a sugar high, to say the least! 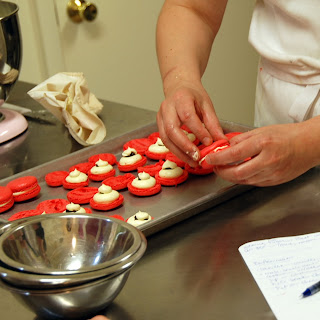 Assembling the Macarons
Overall, I was extremely impressed with this class. Am I the next Pierre Herme? Uh, no. However, I can say that we were all successful in creating these finicky little pastries and we gained a ton of insight from someone with real, in depth knowledge of the process. Not only were our creations edible, they looked and tasted good too! I served some at work the next day and everyone was impressed. Cecelia encouraged us to not rest on our laurels and to make sure we try them at home again as soon as possible. I have already purchased my almond flour and will be working on recreating them over the upcoming holiday day weekend.

Ann Arbor is a small foodie heaven. I’d highly encourage you to spend at least a day or two eating your way around the city, Then, take a pastry class from Cecelia. She doesn’t just teach macarons, although the classes are in high demand and just about always filled. Actually, Cecelia confessed to us that her true favorite dessert to make is éclairs and she feels that hers are some of the best around. I think I smell a birthday present for my husband and another trip to Ann Arbor…