In Defense of the Food Truck 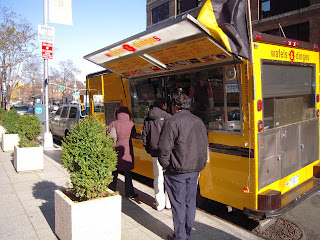 This is a letter to the City of Cleveland in support of Christopher Hodgson and Jeremy Esterly in their quest to (I assume) allow food trucks the ability to park on the street. As I understand that under current rules they are sequestered to only private property.

To Whom It May Concern:

I am writing to you in regards to the notable absence of food trucks here in Cleveland. Over the last ten years we have seen the culinary landscape bloom into what can only be described as one of the best cities in the Midwest to enjoy great food. We really are blessed to have such a great collection of independently owned restaurants.

Why do people love these mobile kitchens so much?

1. You can go to the food, or the food can come to you. If I live in Shaker Heights that truck might be in University Circle a couple days out of the week. This is much closer than if say it was a free standing restaurant in Westlake. When it coincides with other local happenings such as the Cleveland Film Festival, sporting events, or concerts it makes for a great night out.

2. It expresses the local tastes of the city. The city of Los Angeles has numerous Mexican inspired trucks which showcase the city’s proximity to, and appreciation for, Mexico and the food of its people. What would Cleveland’s be? Well, the only truck I know of in Cleveland (Seti’s Polish Boys) has managed to make it on the Food Network’s “The Best Thing I Ever Ate”. People come to cities seeking these things out because they are so unique. The hot dog carts that are downtown do not reflect anything about Cleveland. You can plop that cart down in any city across the country and it’s still just a hot dog cart.

3. They’re an affordable luxury. These are hard economic times in Cleveland. Not everyone can afford to eat at the nice restaurants. The items sold from a truck represent the same thoughtfulness and craftsmanship you would get at a restaurant, but at a fraction of the price. It can even be as simple as a $3 snack in the middle of the afternoon. Even though budgets are tight, there is a joy that comes from taking a walk with a coworker and sharing something as simple as a quick sandwich.

4. Much cheaper to open than a restaurant. Most sous chefs and line cooks dream of one day opening their own restaurant someday. The dream however requires massive investment in kitchens, dining rooms, equipment, etc. A food truck allows for a much leaner operation. This creates an opportunity for people that otherwise could not afford to finance an entire restaurant.

5. The possibilities are much greater in a truck than a cart. In defense of the hot dog carts, this is Cleveland; the elements don’t allow for much creativity when you’re being blown around by wind, rain, snow, and cold air. A truck allows an owner to shelter themselves and the food from the elements. I’ve been to trucks in New York City who are perfectly comfortable in the middle of December. They can also have a variety of different foods without worrying about limiting themselves to what they can fit in a food cart.

6. It adds to the pedestrian experience. This adds instant buzz to the area immediately around the truck. This is the kind of thing that piques people’s curiosity. They can easily see a truck. If there is a line of people waiting next to it then they really get curious. (They might just drive by and decide to park their car to see what all the commotion is about.) With the viral nature of social networking sites such as Twitter and Facebook, trucks are able to generate buzz around the city just by announcing where they’re going to be that day. If orchestrated to coincide with a local event it offers a symbiosis for both the truck and the event.

I’ve seen enough of these things work successfully to know that this is an idea that would be absolutely huge in a town with a hankering for good food at good prices. There is no doubt in my mind that if allowed on the streets of Cleveland many more would follow. With startup costs that are a fraction of what a medium to high end restaurant, there is no doubt in my mind that the talent in our city’s kitchens would soon follow. Take care in your consideration – the city’s kitchens are watching.