A few weeks ago I received an invitation from the folks at Culinary Vegetable Institute to attend their January “Earth to Table” dinner featuring Chef Craig Deihl (as in “The Real Deihl” of Cypress Lowcountry Grille, in Charleston, SC. If you read this blog with any regularity then you’re probably well aware of my affection for southern food.

Since I was allowed to bring a guest, and my wife was unavailable, I brought Stuart Spivack along (both dinners were graciously provided by CVI). From the east side of Cleveland, it takes about an hour or so to make it out to the compound.

The Culinary Vegetable Institute is an impressive place in its own right. The 11,000 sq ft facility houses an incredible two story kitchen (it even has an Anti-Griddle), a dining room with 22’ ceilings and a lodge-like atmosphere (seats 90), accommodations for visiting chefs and their teams, a culinary library, a root cellar, and a wine cellar. Just outside the impressive structure are experimental vegetable, forest, and herb gardens. (I’m not sure what a forest garden is, but I’ll make sure I ask the next time I’m there.) In all honesty, this is probably the most impressive thing I’ve seen since I was at Stonebarns, in Pocantico Hills, NY. (If you’re ever in the NYC area anytime other than winter, it’s a must see.)

As we walked into the CVI, were immediately greeted by both Lee and Mary Jones. Once we checked in they encouraged us to take a look at what was going on in the kitchen. I’m guessing I made three or four steps before it hit me – a pungent smell of cured meat. People were painstakingly loading up a table covered with plates filled with charcuterie that had been brought up from their own “Salami Room” which I’m assuming is at Cypress. (Video of Chef Diehl and his sous chef making salami, here.) 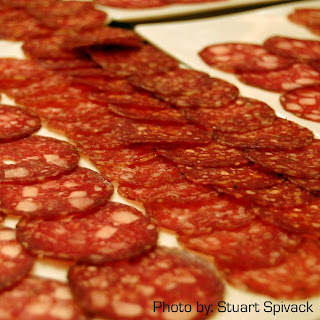 Here are my highlights for the dinner:

Candied Lamb Bacon with gnocchi
For me this was a serious punch of flavor to start the dinner. This was actually my favorite item of the night. This was salty and sweet at its finest. Stuart said that Doug Katz at Fire used to have this on the menu. In talking to Chef Deihl, this is just a throw away cut of meat. It's one thing to do something with nothing, but do this with nothing was just awesome. I absolutely loved this dish. 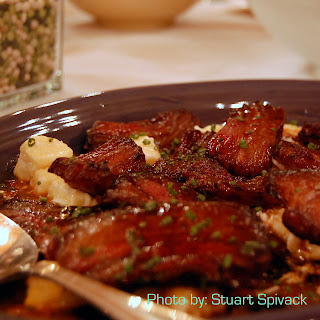 Ice Spinach with Maytag blue cheese
Ice spinach? What's ice spinach? It's actually a patented Chef's Garden process that is very similar to that of ice wine. While I didn't eat enough of it to be able to say exactly what it was that made it so different, I can say that the dressing, blue cheese, and spinach epitomized the word harmony. Deihl will be getting a recipe request from me, and The Chef's Garden can count on a call about a more detailed explanation on this curious process. (I smell a future post.) 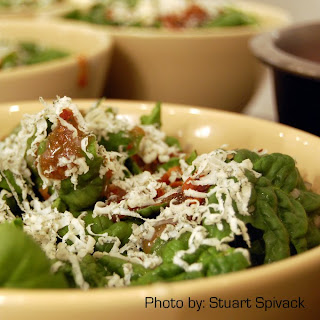 Cumin and Orange with Pecorino Tortufo
There wasn't anything outrageously clever about this dish; it just tasted really, really good. You know a vegetable dish is good when people have their eye on what's left in the carrot bowl, with a plate of short ribs and chuck still sitting on the table. I singled this one out, but believe me when I say every single one of the vegetable bowls left the table empty. 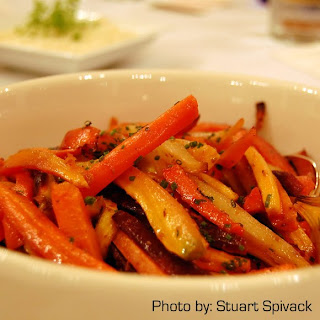 Chocolate Beet Brownie with Homemade Ice Cream, Candied Ginger Jam
Chef Deihl actually used something like five pounds of beets as the "sugar" in the brownie batter. A little skeptical at first, I was pleasantly surprised that the beets hadn't been totally masked by the chocolate. When you bit into the brownie you could feel small bits of beets in your mouth. I thought this was a very creative way to incorporate a vegetable. (Also pictured is the Goat Cheesecake with Lemon-Fennel Confit and Anise Hyssop.) 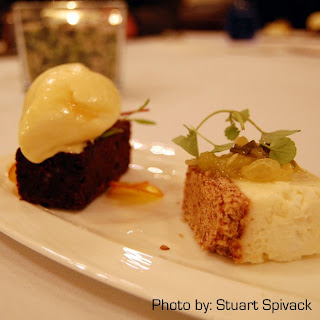 I can’t tell you enough how much I enjoyed this dinner. What made it such a special event was that the chef did such job of putting his signature on the each and every dish, while not overshadowing the tremendous quality of the Chef's Garden vegetables. If the drive out to CVI is discouraging you, just know that at the end of that trek awaits a very special dinner.

For information on upcoming dinners, click here. I have already booked our spot at the Mosefund Mangalitsa dinner on March 27 with Chopped winner Chef James Briscionne.