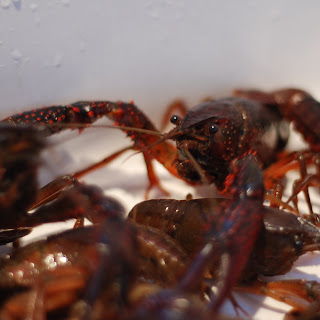 Hey, I thought we were friends!


When I worked at Muirfield Village Golf Club, there was a creek in front of the third green that had flooded after a heavy rainfall. As a couple of coworkers cleaned silt off of the green there was a call over the radio stating that there was a live scorpion on the green. Needless to say, they don't have scorpions in Columbus, OH, but they do have, what we call crayfish, though not as large (or plentiful) as those down in Louisiana.

Imagine how stoked I was when I got an email from Bay Lobsters announcing a shipment of live crawfish. Since I live in Ohio, any étouffeé I've ever had has been made with shrimp. So I was very excited to get my hands and these little guys, since it isn't something that you can just drive down to the grocery store and buy. While Bay Lobsters does carry the frozen already peeled crawfish tails, everything I've ever read on the subject says that the live critters are the only way to go.

As I drove back home with my 2 1/2 pounds worth of my temporary pets, I could hear them "clacking" away on the floor of the car (in a bag). I have to say that I was dreading the idea of boiling these lively little guys. It was going to be murder on a grand scale. As I heated up the water the crawfish kept climbing out of the bowl and falling onto the floor. While unpleasant at first, the boiling of the mud bugs wasn't as bad as I thought it would be.

I used John Besh's My New Orleans for the recipe. I think the cool thing about this book is that Besh gives a lot of the building blocks of the New Orleans favorites while also offering some recipes from his French culinary background. There is a lot of nuanced information that you don't seem to get with some of the traditional books.This recipe calls for an entire pound of crawfish tails, but he also has a franco-centric dish that calls for just ten tails. I haven't cooked out of this book that much because it isn't very seasonal for this time of year, but when the strawberries come out this thing will be getting a work out.

The étouffeé was very good, especially the next day. I don't know what it was, but when I do it again I will definitely make it the day before. The spice (which is present but restrained), seems to incorporate itself into the tail meat when it sits overnight. Biting into one of these tails doesn't dispense an immediate and overpowering spice, but a slow crescendo that seems to sneak up on your tongue after you've swallowed the bite. When I ate right after making it, there seemed to be two separate flavors: tail meat and then the other stuff. If you make it let me know which way you prefer it.

1. Heat the canola oil in a large pot over moderate heat. Cook the onions, celery, carrots, leeks, and garlic, stirring often, until they are soft but not brown, about 3 minutes.

2. Add the shells, the bay leaf, thyme, peppercorns, and 3 quarts water. Increase the heat to high and bring to a boil. Immediately reduce the heat to low and gently simmer, skimming any foam that rises to the surface, until the stock has reduced by half, about 2 hours.

3. Strain through a fine sieve into a container with a cover. Allow the stock to cool, cover and refrigerate, then skim off the fat. Freeze the stock in batches to use later. 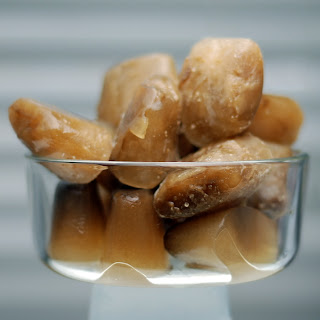 Besh suggests putting the stock in an ice cup tray

1. Put the fat, oil, or butter and the onions into a medium saucepan and sweat the onions over moderate heat until they are translucent, about 5 minutes. Pour the rice into the pan and stir for 2 minutes. Then add the chicken stock and bring to a boil. Add the bay leaf and salt.

2. Cover the pan with a lid, reduce the heat to low, and cook for 18 minutes. Remove the pan from the heat, fluff the rice with a fork, and serve. 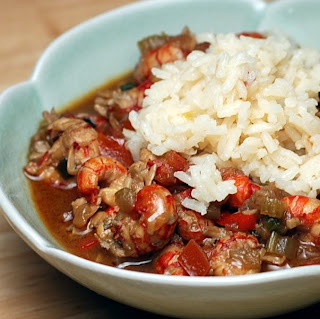 1. Heat the oil in a large saucepan over medium-high heat. Whisk the flour into the very hot oil. It will immediately begin to sizzle and fizz. Keep whisking and reduce the heat to moderate. Continue whisking until the roux takes on a gorgeous dark brown color, about 15 minutes. *I don’t know if I screwed something up but mine only took about half that time* Add the onions, reduce the heat, and cook until the onions caramelize. If you add all the vegetables at the same time, the water that results will boil the onions and their sugars won’t caramelize.

2. When the onions have turned the roux shiny and dark, add the celery, bell peppers, garlic, thyme, cayenne, and paprika. Cook for 5 minutes. Now add the tomatoes and the Shellfish Stock and increase the heat to high.

3. Once the sauce has come to a boil, reduce the heat to moderate and let simmer 5-7 minutes, stirring often. Be careful not to let it burn or stick to the bottom of the pan.

4. Reduce the heat to low and stir in the butter. Add the crawfish tails and green onions. Season with Worcestershire, Tabasco, salt, and black pepper. Once the crawfish tails have heated through, remove the saucepan from the heat.

5. Serve in individual bowl over rice.