There is something about a lingering grease smell after the dinner is long gone that I absolutely abhor. One way to mitigate that smell is to cook the meat out on a grill. Simple enough, right? Except I live in Cleveland where we are currently in what I like to call “The Shining” season. Continuously falling daily snow with the mercury dropping near ten degrees is hardly grilling weather. It’s enough to make you want to pull out the ax and chop down a door, yelling, “Here’s Johnny!”

I’d been smitten with the Big Green Egg ever since my wife showed it to me about a year ago. I’ve looked at it on and off over the last six months hemming and hawing over whether it was worth the money.

If you’re not familiar with The Big Green Egg, let me give you a little background. BGE is what we have come to know as a kamado style cooker. The modern version is made of the same ceramic as the heat tiles on the space shuttle. The heat retention of the ceramic allows the grill to retain most of its heat and use the charcoal very efficiently; this ends up being a fairly big deal up in the Ohio winter because a lot of heat is lost to the cold weather with a metal grill. The high efficiency also allows you to smoke something at low temperatures for up to 20 hours without reloading with charcoal.

Open the windows and unplug the smoke detectors; Daddy’s about to sear some beef! I hate the smoke. I hate the smell inside my house (three hours afterward.) If I have a choice I’d rather grill it outside. The BGE is capable of temperatures between 700 and 800 degrees. With this grill I’m going to get a better result than I ever would indoors. The other cool thing is that the available 24” pizza stone allows you to achieve the high temps necessary for pizza without needing to hack the lock on your oven cleaning setting.

I had to have one of these, but I couldn’t get past the price. Regina and I decided to at least look at them to find out what the whole thing was going to cost. We went to Embers in Solon, where the salesman was extremely informative. There was no question that I was sold on the grill, but I just couldn’t get over the price of these things. It was one of those deals where they pretty much regulate the same price among all of the dealers. You weren’t going to troll on the internet for a cheaper price.

The only place in town that had an XL BGE was Northfield Fireplace. When we got there we saw every size BUT the XL. When we asked the salesman where the XL was, to our delight he told us that it was over in the other section of the store – in the closeout area. Like Ralphy on Christmas morning, it took all I had to contain my excitement. We walked through the door and there it was, in all its glory – a demo and marked down 50%!

The salesman started talking about all of the features on the grill while I sat there and feigned ignorance. He also threw in the plate setter (which acts like a diffuser), the pizza stone, a new grill rack, and the frame with wheels they call “The Nest” for a grand total of $750! 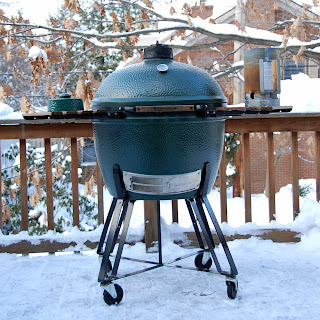 
Using the winnings from a poker tournament, I was now the proud papa of an XL Big Green Egg.

The first thing I made was a plum glazed pork shoulder recipe from John Besh’s cookbook. All I can say is that this thing fun as hell to use. It was ten degrees outside and I cooked the pork to perfection with very little trouble.

While I have to admit that I’m always intrigued by the latest technology, this two thousand year old kamado relative will probably be the coolest cooking thing I may ever buy. I can’t wait to explore all of the seemingly limitless possibilities The Big Green Egg has to offer.

Email ThisBlogThis!Share to TwitterShare to FacebookShare to Pinterest
Labels: The Big Green Egg