My obsession with Christina Tosi and her crazy ingredients continues. This pie crust is made with bread crusts combined with the butter and cinnamon taste which tastes just like cinnamon toast. I could easily grub on the crust alone. The brown butter custard is also unique in the sense that the brown butter is encapsulated in a gelatin floating in the filling. With every bite you get this intense little bursts of brown buttery goodness.

I made this in a glass pie pan and found that the crust needs to warm up a bit before it will easily pop out. When this crust is totally refrigerated it puts a death grip on the pan. I warmed it slightly over a low flame on the stove.

This particular recipe was in the recent November issue of Food + Wine. The printable version for the filling is here. The Cinnamon Toast Pie Crust, which I will definitely will be using for other pies, is located here. 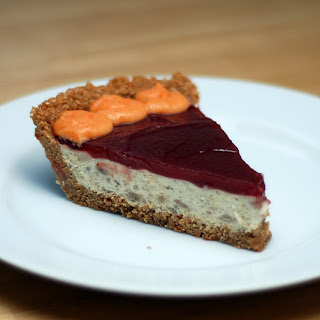 Filling
The pie can be refrigerated for up to 3 days.