Unlike Thomas Keller, I don't have the Central Valley's bounty beckoning at my back door. Each week as I peruse the ever shrinking offerings at my local farmers market, I'm constantly faced with the question of what to make with fewer and fewer locally available vegetables.

There comes a point where you just get tired of the same base seasonal dishes that have only a small twist to them. I'm not saying it has to be "Fancy Food", as some people call it, but give me something different and tasty.

I can't say enough great things about Keller's "Ad Hoc at Home". Armed with the limited number of vegetables that were available to me, this Lentil and Sweet Potato Soup fit the bill for different, tasty, and locally available Ohio fall vegetables.

I originally decided to make this for my wife, but after tasting it myself I was more inclined to stash it away for myself. Trying to taste this thing with your eyes does it no justice. The combination of the bacon fat, the small amount of mild curry, and the punch of the red wine vinegar really creates a satisfying taste to the dish.

When it's all done this soup is more like a quasi-chili than anything else. The lentils absorb nearly all of the stock so it ends up being fairly thick.

Is this the way Keller intended the soup to look like? I don't know. There wasn't a picture in the book, but I bet it came pretty close. 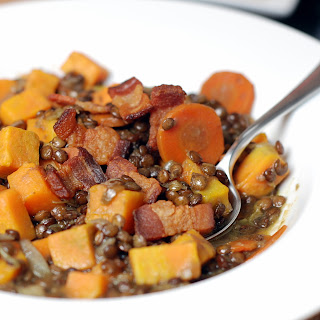 
Cut the bacon into lardons that are 1 inch long and ½ inch thick.

Heat the canola oil in an 8 to 10 quart stockpot over medium heat. Add the bacon, reduce the heat to low, and render the fat for 20 to 25 minutes. The bacon should color but not crisp. Using a slotted spoon, remove the bacon and set aside.

Add the carrots, leeks, onions, and curry powder to the pot and stir to coat in the bacon fat. Season with salt, reduce the heat to low, cover with a parchment lid, and cook very slowly for 30 to 35 minutes, until the vegetables are tender. Remove and discard to the parchment lid.

Meanwhile, peel the sweet potatoes. Trim them and cut them into a ½ inch dice. Put the potatoes, one of the sachets, and 2 teaspoons of salt in the large saucepan, add cold water to cover, bring to a simmer, and cook until the potatoes are just tender, about 10 minutes. Drain and spread on a tray to cool; discard the sachet.

Add the lentils, second sachet, and stock to the vegetables, bring to a simmer, and simmer for the 30 to 40 minutes *mine went every bit of 40 minutes*, until the lentils are tender. (At this point, the soup can be refrigerated for up to 2 day.)

Spread the bacon in a small frying pan and crisp over medium-high heat.

Add the vinegar to taste to the soup, then add the potatoes and heat through. Season to taste with salt and pepper.

Serve the soup garnished with the bacon and cilantro leaves.