While living in Philadelphia, I had the opportunity to host, with some of my fellow co-workers, the most delightful tea party themed going away party for our boss. We managed to transform our cramped office of case managers and social workers, into an early afternoon sophisticated tea room.

The highlight of the event were these tiny tea sandwiches that I found from a local caterer named Le Petit Chef. During my research, I discovered that this company, located in Radnor, right outside of Philly, was actually nationally recognized for their miniature tea sandwich creations. They ship them all over the country and were featured in Victoria Magazine.

I distinctly recall the arrival of their sandwiches that particular afternoon...I remember being concerned when I saw the approximately 12" x 12" box that supposedly contained all of our 100 tea sandwiches. I thought, is that it? Will we have enough food to feed our ever ravenous coworkers? Sure, we had desserts and other assorted finger foods, but these sandwiches were to be the centerpiece of the affair. We had ordered three types: Cucumber, Egg Salad and Chicken Salad.

I nervously watched as we opened the box, peeled back the damp paper towels (placed inside to keep the bread from drying out), and witnessed the reveal of the most miniature, impeccably made, pristine sandwiches I had ever seen. A quick glance at their website, will show you that each offering has a special garnish and/or placed on dainty pieces of bread, shaped from cookie cutters.

While I can't speak for the Chicken salad sandwich (I'm allergic), I can tell you from experience, that the Egg Salad and Cucumber sandwiches were out of this world...they were creamy, smooth, melt in your mouth mini masterpieces...I could have eaten the whole box if they let me.

It was with this fond recollection of the creations were feasted on that afternoon, that I was inspired to host a surprise tea party baby shower for my best friend, who was having her first baby girl. What a fabulous opportunity to bring together a bunch of women and host a tea party of my own.

Although I did spend hours researching tea party sandwich recipes on the Internet, I did start out with some additional inspiration from lunches my mother and I had at Mrs. Ticklemore's Tea Room in Akron's West Point Market. My detective work discovered that the ingredients for the items they serve can be found within the store, and I decided to go with 2 of their creations as part of my menu.

I decided to leave dessert to the experts. I enlisted the help of Tremont's Cookie and a Cupcake for 4 flavors of mini cupcakes and I secured the baking skills of Flour Girl, owned by the Pastry chef of on of our favorite restaurants, Fire Food and Drink in Shaker Square. 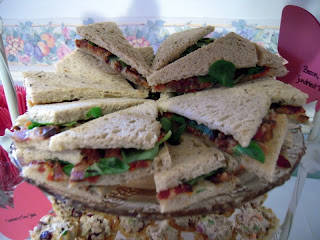 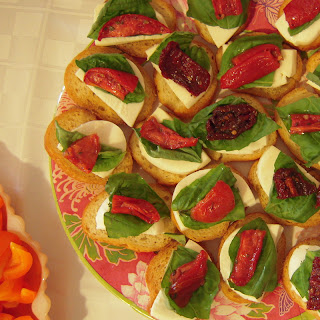 Roasted Tomato, Basil and Mozzarella Crostini
* Belgioso Mozzarella
* French bread crostini - from The Fresh Market (you could toast your own at home,
but I used these as a time saving measure. They were crunchy, but quite tasty)
* Basil - from the North Union Farmer's Market - a steal at only $2 for a large
bag!
* Roasted Tomatoes or Sundried Tomatoes - West Point Market was out of the Roasted
Tomatoes that they carry in the deli case, so I used a combination of Roasted
Tomatoes from Whole Foods and bottled Sun Dried Tomtatoes. My preference is for
the Roasted variety as I find the Sun Dried too chewy 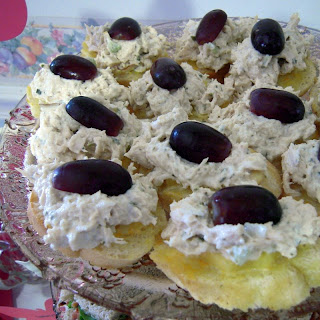 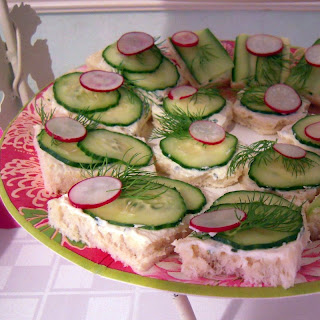 Herbed Cucumber Sandwiches
* White Bread and The Other Spread (herbed cream cheese) from the West Point Market
* Bread was coated with unsalted butter, prior to adding The Other Spread
* Cucumbers
* Dill and Radishes from the North Union Farmers Market 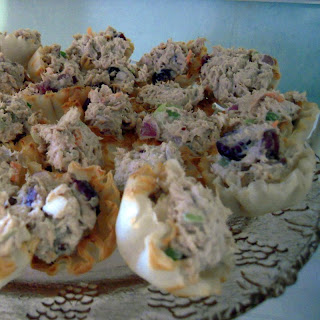 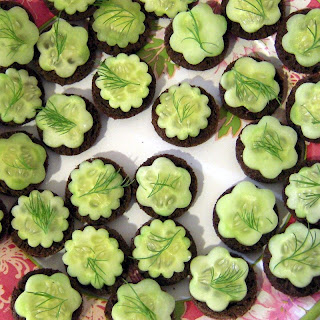 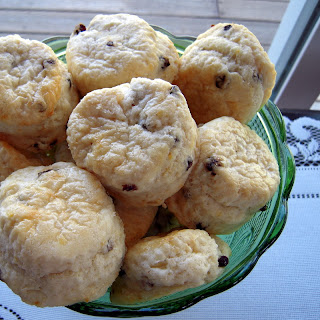 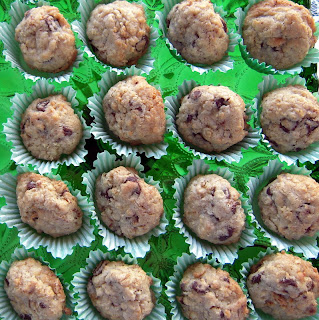 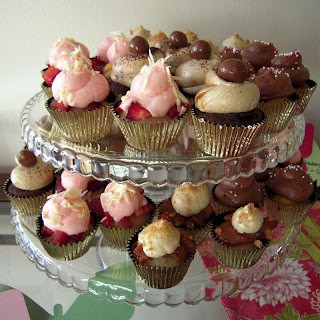 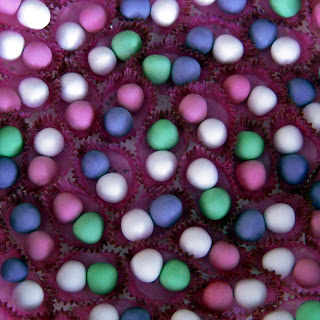 European Chocolate Covered Mints from Westpoint Market
Rounding out dessert were mini Pineapple cream cheese tarts that my mother made and mini cheesecakes made by the Grandmother to be.

Needless to say, everyone was sent home with a to go box, filled with extra goodies.

Through my trial and error prior to the party, I found that it is a special skill to make such dainty sandwiches, and decided for my first go of it, I would have to go with what would be easiest to pull off for a large crowd. My sandwiches weren't as traditional as those offered by Le Petit Chef.
Posted by Dine O Mite! at 10:08 PM