Friday afternoon Regina and I decided to drive over to the West Side Market to pick up some pork belly. A place I've always wanted to try is the Seti's Polish Boys. Come to think of it, Seti's isn't a place at all, but rather a truck parked in a place (Dean Supply parking lot). 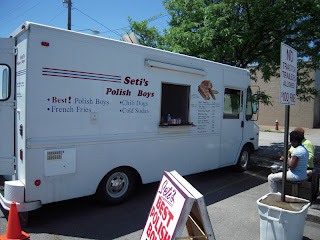 Their concept is simple, make the best Polish Boy in town. Offering about 4 or 5 different versions of their dogs, Seti's doesn't try to get too fancy. 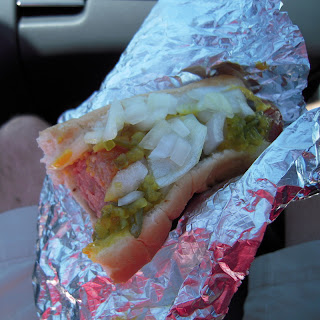 I ordered the classic Polish Dog with onions, relish, and mustard. Admittedly, I didn't think it was going to be some earth shattering experience. After the first bite I told myself that I could easily walk up and buy two more of them and down them on the spot. Is that "earth shattering"? Maybe.

In the end it was the dog that shined through on this thing. It is a very juicy rendition and when it's combined with the relish, onion, and mustard it just tastes even better. I also bought an order of fries that were freshly cooked and hot as hell.

Their other incarnations were a little more out there for me. First off, I don't like fries on top of anything (and I certainly don't want bbq sauce on top of the fries), so I think the Best Polish Boy is out of the question. I will, however, be trying the other dogs that have the chili on them.

In the end I walked away a big fan. When I asked the lady working the window how long they had been there she said that they've been at Dean Supply for two years. Before Dean they had been over at Tri C Metro for seven years. I'd say that's plenty of time to create the perfect Polish Boy.

[See the picture for the menu.] 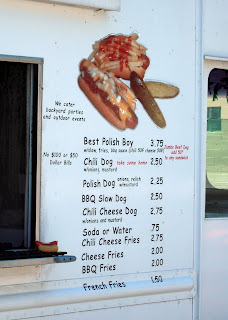 The Best Thing I Ever Ate

The Seti's lady (I should have gotten her name) at the window handed me a business card as I left. After I had finished inhaling my lunch I looked at the card and on the back they had some interesting info.

Apparently The Food Network is going to have a show that airs in June called "The Best Thing I Ever Ate". In it, different Food Network stars such as Bobby Flay, Tyler Florence, Ted Allen, Michael Symon, and others talk about some of their favorite foods. 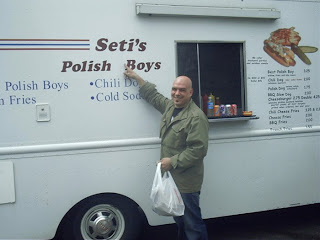 (Picture from Seti's posted on Yelp!)

In the episode that airs on June 23 at 9:30pm, Seti's Polish Boys will be making one of the best things Michael Symon ever ate. Pretty cool, huh?

Speaking of The Best Thing I Ever Ate...

When we went to the North Shore of Oahu (Hale iwa to be more specific), I had the most awesome mochi ice cream E-V-E-R. In an ice cream shop called Scoops of Paradise, which has a flavor named after local celeb Jack Johnson, I tried ice cream mochi for the first time.

I'll be the first to admit that I don't like the way classic mochi taste (no ice cream). In fact there really isn't much taste at all. But if you take that rice flour coated nothingness and wrap it around some good ice cream? Whoah. You end up with an absolutely addictive sensory experience between the chewiness of the mochi and the flavor of the ice cream.

When we walked into the shop we perused the case and that's where I saw this rack of strange looking oval things. When I asked the guy what they were, he simply called them mochi. When I asked him what the tasted like he said I'd have to try them myself, that it was hard to explain.

Right after I ordered a couple he gleefully smiled and said, "I love seeing people's faces when they eat their first mochi."

I took a bite and was instantly in love (think Tony and Maria in West Side Story).

All I can say is that over the next three days I went back to that place every night. I was in fact addicted.

If you've ever talked to Dave at Whole Foods you know that he's a pretty cool dude. After being unsuccessful in our quest to get Bubbie's ice cream mochi ordered at some other grocery stores, Dave came through and informed me today that they had them in.

Bubbie's (made in Honolulu) are THE ice cream mochi that are served in restaurants around the country. They aren't that bullshit that they carry at Trader Joe's or even the ones Whole Foods was carrying before. Those mochi kind of melted in your hand. The outside becomes sticky and they just don't taste all that good. If you've ever had ice cream mochi and loved them, I guarantee these are the ones. 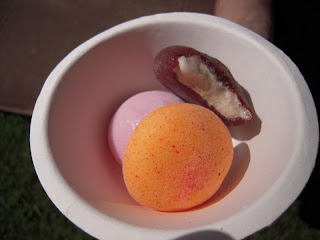 If you are ice cream mochi addicted, like myself, I suggest you head to the Whole Foods on Cedar and Warrensville. My hope is that these will sell well and become a Whole Foods staple.
Posted by Dine O Mite! at 8:51 PM