We saved our fanciest dinner on the Big Island for last. Merriman's was a highlight of our trip in 2007, so it was a given that we would be returning. Peter Merriman's flagship restaurant in Waimea has been recognized throughout the country as a leader in Hawaiian Regional Cuisine (HRC), along with likes of Alan Wong and Beverly Gannon. Merriman's menu changes as its staple items, but the accompaniments and preparations of the main proteins change with what's in season and available on a local level. 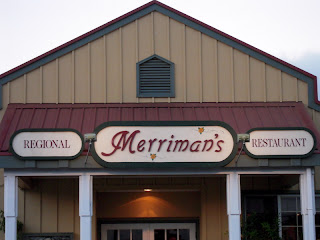 We had been looking forward to going on the Merriman’s farm tour, but unfortunately it is no longer offered. Instead we just spent the day up in Waimea having lunch at Huli Sue’s and visiting the Parker Ranch, prior to our dinner.

The atmosphere at Merriman’s is upscale and casual at the same time. It's a beautiful space that's done in shades of yellow and green. The kitchen runs along the back of the restaurant. It lacks outdoor dining, but that's okay since it's located in “Upcountry” of the Big Island, where the temperatures can be chilly compared to the coast and light rains are frequent. I found their environment very welcoming and not at all pretentious or stuffy. 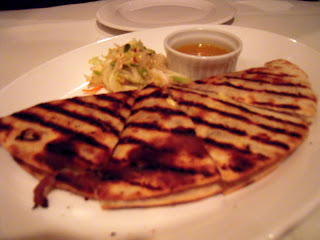 We began our meal with the Kalua Pork and Sweet Onion Quesadilla with Housemade Kimchee (too bitter for my taste) and Mango Chili dipping sauce ($10.95). I would have loved more pork within it, but also filled with sweet Maui onions and cheddar cheese, it was one of my favorite appetizers of the trip. 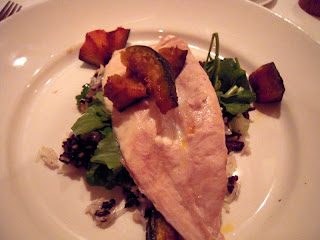 Having visited the Natural Energy Lab a few days prior and learning about the sustainably raised Kona Kampachi, I was delighted to see it on the menu and chose it as my entree. This preparation was steamed and accompanied by spiced Kabocha Squash and Garlic Macadamia Nut Rice. The original entree had a Lobster Citrus reduction, but the waitress was able to substitute another sauce (a sweet ginger soy), based on my request. The fish was lovely and the sauce I had made a nice pairing. I’ll admit my preference is for squash over rice any day. I would have preferred a stronger spice mix on the squash (and more of it) vs. the rice, which wasn’t quite as flavorful as expected. 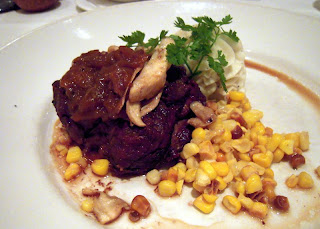 Having been left relatively full from his lunch at Huli Sue's, Cal went with the local Grass Fed Big Island Filet Steak ($38.95). It was an 8oz. filet, served with local corn, Maui Onion marrow jam and Rosemary mashed potatoes. He said what he liked the most about it was that it was so delicious yet so simple. 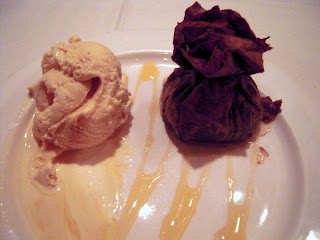 Dessert was the highlight of the meal for me. A carry over from our first dining experience there in 2007, one of Merriman's signature desserts is their “Original Hawaiian Chocolate” filled Phyllo Purse ($12). It's gooey, melted chocolate, wrapped inside flaky chocolate phyllo dough. They serve it with a generous scoop of Dulce le Leche Tropical Dreams ice cream and a lemon drizzle on the plate. I wasn't sure about the lemon sauce, but it actually paired very well with the rich chocolate and coffee like flavor of the Dulce le Leche ice cream. Since I became grouchy at Cal's initial suggestion to share a dessert, he (as a good husband should), ordered his own but he substituted Tropical Dreams Tahitian Vanilla ice cream instead.

One thing we noticed is that the plating of the food is very simple. While this may be a drawback for some, be careful not to let that fool you into thinking the food isn't that good. I'd guess that their simplicity in plating is just a by product or extension of Merriman's Farm to Plate approach. It's not about wowing you with the way it looks, but rather the way it tastes. You eat at Merriman’s to escape the mainland and experience what the Islands have to offer from a culinary perspective and they deliver the satisfying experience that you're looking for.

Total cost for a starter, 2 entrees, 2 desserts and a Kona Brewing Company Longboard Ale, without tax, was $114.00. Worth the price and if we return to the Big Island, we'd be back to Merriman's without a doubt.

As an aside, I asked the Hostess if they ever share recipes, as I'm always trying to recreate my dining experiences at home. She told me that if I e-mail their office, there are several recipes they can share with me, but she was unsure if the pastry chef would part with the Chocolate filled Phyllo Purse recipe. My belief is: you never know if you don't ask...stay tuned.

The overall experience is absolutely wonderful. The food is very just as thoughtful. If you have the chance to get to the Big Island you have to stop here.