Tucked in a business park to the left of Home Depot sits an awesome local find in Ceviche Dave's. A fellow Chowhounder alerted me to this tiny stand, sandwiched between local stores and offices. They have a great sign (see below) on each side to catch your eye. The parking lot is around the back. 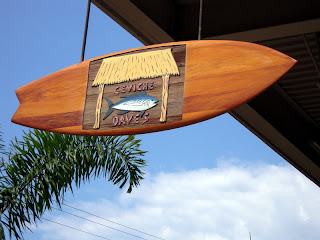 Upon entering, we asked what fish was featured in the day's ceviche and they pointed to a bright colored flag in the corner. Hanging on the wall was about 5 or 6 different flags with different pictures of fish on them. Depending on what the owner brought back from the fishing dock, that’s what gets put in the ceviche. On our visit the fresh catch was marlin. They also try to use as much organic produce as they can.

When asked what was good, there was positives about so many of the different offerings that we decided to just go with the sampler (everything is $10 or under). The sampler comes with a small portion of four different ceviches, chips, and bread. 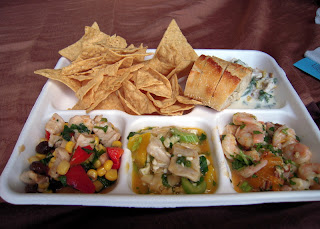 Favoring the spicier items, Cal preferred the Escondido (fresh fish in habanera sauce with cilantro, onions, sweet bell peppers, corn and raisins). I gravitated towards the Ta’apuna (Tahitian style poisson cru in coconut milk, with green onions, parsley, bell peppers, and cucumbers). I loved the Abreojos (farmed shrimp in a blend of cilantro, onions, pecans, mandarins and orange juice) but had to limit my consumption as I'm allergic to oranges. The sampler was actually so good that we quickly ordered a second.

Ceviche Dave’s gets a huge thumbs up from us for using biodegradable trays and “to go” containers, along with biodegradable spud ware (made from potatoes) cutlery, and recycling containers.

A lot of locals were started rolling in as we sat down. There weren’t really any tourists that I could see, but due to the location I wouldn’t think there would be. This is a great place to go if you’re going to the airport. Located maybe five minutes from the airport, it’s a great place to stop before or after a flight, or if you’re going to the National Energy Lab.