Pizza and a Sandwich

I don't like to devote entire posts to pizza places and sandwich shops if I can help it. While there are a few exceptions, I like to combine some of these restaurants because I get a lot of people that look at the pizza stuff.

Growing up, I spent a few years in Berea. My favorite pizza was always Donte's Restaurant & Pizza. As you might know, Berea isn't exactly teaming with mom and pop pizza shops. I think one of the things I liked about it was that it tastes a lot like the old Carlo's Pizza in Solon.

I actually called Donte's from Baltimore and told them what time my flight arrived at Hopkins. I got off the plane, walked to my car, and picked up the pie right there as you hit that first light after the IX Center.

When I got there it was ready to go. One pepperoni and sausage, ready to be inhaled. If I had to compare it to another pizza, I'd say it's a lot like Antonio's in Parma or Angelo's in Lakewood. The sauce is a probably a little more plain than Antonio's or Angelo's, but I like the crust.

Should you have the occasion to go to the IX Center I'd give it a try. I wouldn't say it's worth a special trip, but it is an affordable dinner option if you're in the neighborhood.

If you call make sure you use the number below. There's another Donte's/Dante's Pizza that mistakenly gets calls all the time.

THIS GRUM'S LOCATION IS NOW CLOSED
One of the more convoluted shopping centers I've seen is in Solon. There are businesses nestled in the back that you don't even know are there. Grum's Sub Shoppe is luckily out front where it can be seen.

Grum's replaces the mysterious Harvey's Famous Barbeque that was formerly housed in this space. No one seems to know what happened to Harvey's (it was only open a short time before it put up its "Closed for Inventory" sign). At any rate, it would appear this strip mall has made a love connection with Grum's. There was quite the line at 5:30 on a weekday afternoon.

Unlike the one in Cleveland Hts, this Grum's offers a decent sized area to sit down and eat.

I ordered a half of a "The Grum" sandwich. It has ham, capicola, salami, along with your typical veggies. The bread was decent. The sandwich overall was decent. 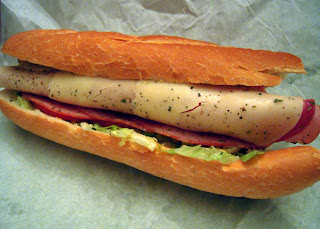 Is there anything earth shattering going on here? I would say no, but if your looking for cheap lunch, or lazy dinner to fill you up, Grum's fits the bill. I'll probably go back during a Miles Market run, but I don't think I'd go out of my way. It's a decent sandwich at a decent price ($6).

As a side note: if anyone has eaten at the Japanese place a few doors down from Grum's I'd love to hear from you. It's on my list of places to try. It seems that the Vietnamese place further down strip is mired in red tape, hopefully that opens sometime soon.