As you can probably tell, I’ve been inspired as of late. I don’t know why but it’s been much easier to write these things with some good music. A few months ago I happened upon 92.3. It takes me back to the old days of Cleveland’s “The End” 107.9, or CD 101 in Columbus. Alternative rock and 1 minute station breaks, I love it.

I think it was sometime back in October or November that Regina came back from Whole Foods with the Half and Half from Snowville Creamery. She said that there was an older guy and a younger girl at the store talking about their dairy products that were going to be carried there. I know CFT and Nancy Heller have talked about using their milk. The WF on Cedar carries it, I don’t know about the one on Chagrin (which I call WF lite.) Normally I would say milk is milk, but this is not the ultra pasteurized stuff that is good until 2014. I can certainly taste the difference. The only downside is that it only comes in half gallon containers. Luckily I am a coffee fiend; so I’m able to use up a carton before it expires. It also helps that they’re an Ohio dairy. Goin’ local, baby! 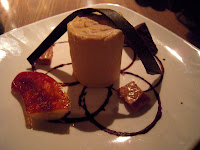 We went to 3 Birds on Friday for the preemptive Valentine’s Day strike. They've added a new pastry chef that absolutely kicks ass. The last few times we had been there we either thought the desserts were okay, and went somewhere else. When I looked at the dessert menu I thought to myself, “Where the hell has this been for the last 6 months? Someone’s been holding out on us.”

I had the special, which was a variation of baked hot chocolate, with ice cream and whipped cream. The flowerless cake was nearly entirely gooey and was awesome with the melting ice cream and whipped cream, and a reasonable size. Regina’s eyes nearly fell out of her head when she saw her first semifreddo in Cleveland. This is my wife’s favorite dessert. If you haven’t tried it you’re missing out. 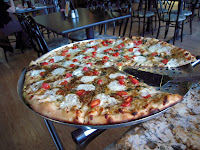 I had lunch with my mother at Sweet Basil in Westlake. Man do I wish that place was closer to my house. We had a pizza called The Grapes of Wrath. When I first saw it on the specials board I was imagining Tom Joad picking the produce for the pizza. It was actually a very good pie that basically consisted of white pizza with basil, grape tomatoes, and balsamic vinegar drizzled on it. If this place was in my neck of the woods it would be my “go to” pizzeria.

On Sunday we went to Slow Food’s Tierra Madre presentation at Moxie. The chili (3 types) prepared by the kitchen staff were really tasty. One of Goatfeather Farm’s 40 pound turkey monsters was used in the turkey chili. She said they still had like half a turkey leftover after making the chili. It was a good time, though. The delegates shared their experience of attending Tierra Madre in Turino, Italy. Don't think that I haven't been keeping my eye on the exchange rates. The euro is approaching $1.20. While it isn't 80 cents like it was when we went in 2001, it's at least approaching affordability. I think when these people went in the summer it was still up around $1.40 or more. It truly is an awesome place. I'd love to go back.
Posted by Dine O Mite! at 12:06 AM