Arctic Char in the Arctic Freeze

We try very hard to use sustainably caught or raised fish whenever possible. Arctic Char is one of our favorites. In terms of cost it goes for about $10-11 a pound at Whole Foods. Char is on the recommended list for the Seafood Watch List.

This recipe is for Butter-Basted Salmon (or Char) with Tea from a fantastic cookbook by Rick Moonen & Roy Finamore called Fish Without a Doubt. I think the tea in this recipe is the key to the whole thing. The smokiness of it is present but doesn't overpower the flavor of the fish. I think it should also be mentioned that the accompanying cucumber salad and horseradish cream recipes should be served with them. I wasn't sure how much I was going to like them but in all honesty the whole thing was awesome. 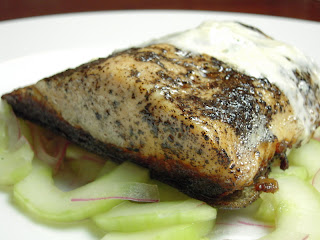 Butter-Basted Salmon (or Char) with Tea
by Rick Moonen & Roy Finamore
Mom's Cucumber Salad
This will keep for up to 5 days in the refrigerator.