Finishing the Week at Flying Fig

We figured that since our take from the Grower's Market at Shaker Square was rather large we knew we'd being eating at home during the week. After tonight we were going to give the credit card a rest. We decided to head over to the west side to The Flying Fig. Regina loves small plates; so I never have to twist her arm to go there. She is all about smaller portions but more options. I am more of an entree kind of person. I really think Chef Karen Small does both things very well. I would do the three small plates for the price of an entree thing if there was nothing to choose off of the entree menu, but tonight I would've ordered any one of those entrees.

As a starter we got the cheese plate. Lately this has been our MO. I like it because it keeps you from garbaging up on anything too heavy. The cheese plate here is actually one of my favorites along with 3 Birds and Parallax. It has 3 different types of cheese, along with blueberries and sauce, pecans, bread, and crackers. I think it's a winner.
Regina predictably got the 3 small plate sampler which was comprised of Mackenzie Creamery Goat Cheese Mousse, Pork Belly, and Braised Lamb Shank with Carrots and Scallion Pan Cake (more like a crepe). I wasn't so kean on the Goat Cheese Mousse, but she seemed to like it. The Pork Belly and Lamb Shank (which were specials) were sex on plate. Really, really good!
I ordered the Grilled Short Ribs with Horseradish Potato Puree, Haricot Vert, Pilsner Reduction. I am a sucker for the short ribs here. I've ordered them in a couple of different forms and they never require a knife to eat. Tonight was no exception. It was the first time I'd ever had the Pilsner reduction. It was so good my wife was using it with her pork belly and lamb shank. Finally I had to cut her off when she started licking the plate. Alright, I lied about the last part, but I think she was about to when the server took it away.
Dessert is the one area that I've always thought that The Flying Fig comes up short. Usually it has to do with the portioning of the desserts themselves. Tonight we were pleasantly surprised. I had the Blueberry Bignet with Vanilla Ice Cream. I have to say, it was the perfect size. The dessert I had at Red the night before was borderline glutony. Regina ordered Chocolate Banana Cinnamon Bread Pudding. The bread pudding appeared to have been made in a pop-over pan, which was accompanied by some caramelized bananas. Again, it was well portioned and very tasty.
Tonight was the first night we'd ever eaten outside at The Fig. Not only was it a pleasant night weatherwise, it was also fairly quiet with it being Sunday night. The only disturbance we had was when a guy on rollerblades came through screaming, "GET OUT OF MY COVE!!!, as he flew down the street. This is in the Top 10 of my favorite Cleveland restaurants. Now that the desserts are up to snuff, who know, maybe Top 5. If you can get a seat outside it's a nice little side street to people watch. If you think of it, request Leslie. She's a fantastic server who knows the menu inside and out. 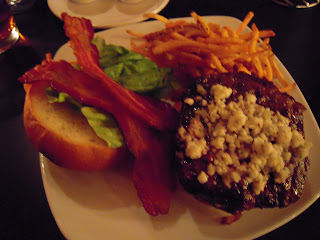 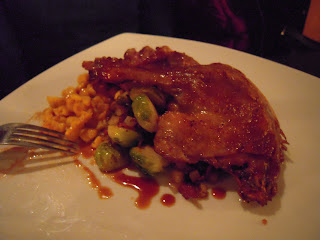 Regina had the Duck Confit with Brussels Sprouts, she absolutely loved it.
For dessert I had the Chocolate Lava Cake, very good.
Regina had the apple and blueberry crisp - she thought it was a little watery.