As far as I'm concerned the west side has the east side beat hands down in pizza. Up until last Saturday, Geraci's was really the only pie on this side of town that I would put in my Cleveland top five. (I don't count Crostatas because they're Neapolitan.)

Ever the optimist, I've soldiered on and continued the pizza quest here on the east side. Since we were staying in and wanted to watch the newly arrived Paris, Je T'aime from Netflix (great movie BTW twenty different five minute short films about love in Paris), we wanted something that would hold up to the drive home. I had heard nothing but good things from people about Compola's Tasty Pizza on Mayfield Rd so we decided to give it a try.

Tasty Pizza, as it's commonly referred to, has dine in as well as carryout and delivery. The dining room is a a series of tables with wooden benches and chairs. While certainly not the kind of place to park your ass for hours on end, it is by no means a dive. 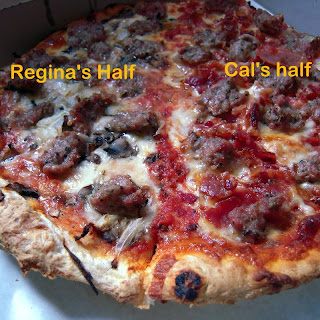 
After paying $15.25 for a 12" with three toppings on each side (pepperoni, bulk sausage, and bacon on my half - onions, mushrooms, and bulk sausage on Regina's half), I hopped in the car and sped home. As is always the custom, I place the pizza in the boot of the car to keep any pieces from falling out during the drive back. I don't know what is, but I usually find one or two slices missing if the box sits on the passenger seat. Don't let this happen to you. Secure that stuff!

We queued up the movie and dug into the box. I like Geraci's a lot, but this pizza had much of what I like about Geraci's and none of what I don't like about them. For me it all starts with the crust. If the crust sucks it doesn't matter what you put on top - the whole thing is going to taste like supermarket dreck.

Tasty makes a dough that has a moderate chew to it, but doesn't have the crunchy edges that destroy the roof of your mouth. (Think age 10... bus comes in five minutes... you wolf down an entire bowl of Cap'n Crunch in three...you spend the entire ride to school tonguing the tattered remains of skin hanging from the roof of your mouth.) The bottom has a brown crispy coating that lends a little bit of crispiness to the pleasantly chewy dough.

The cheese and the sauce are moderately applied. Some people like pizza that is loaded with cheese that when lubed with a lot of sauce slides right the crust - leaving you with a big old hunk of cheese and pepperoni dangling past your chin. Tasty puts enough cheese and sauce to where it clings to the dough anchoring the toppings in place - nice and clean-like.

The toppings were actually very good, too. The mushrooms are fresh (not out of can), which Regina doesn't typically like due to their chewiness, but these were really thin and may have been sauteed. The onions were quartered and thinly sliced which evenly distributed the flavor throughout the slice. My slices were decidedly salty which has a tendency to happen when you have that much cured meat you're half the pie.

I absolutely loved this place. If you look at the list on the upper right you'll see that Compola's Tasty Pizza is the new #2 on my list of "Best Pizza Americana in Cleveland". If you're within striking distance of Richmond and Mayfield Rds in Lyndhurst, you have got to try this little pizzeria.

Update: October 15th, 2010
We ordered a 12", and 14" was accidentally made. Perhaps it was an off night, but the crust was a bit out of control (very thin toward the middle and very puffy and doughy around the edges). I think the 12" might be the best incarnation of this particular pizza. If you do order their sausage, make sure you order the bulk sausage. The regular sausage is thinly cut and tucked under the cheese. I thought the bulk was above average.

Update: November 3rd, 2010
We ordered the 12" and the world balance was restored. The crust was king and the pie disappeared in 20 minutes flat. While waiting for my pizza I noticed the row of coolers against the wall. Tasty has a rather extensive lineup of conventional beers as well as craft beers from, but not limited to, Dogfish Head, Founders, Tröegs, Flying Dog, and Great Lakes ($3 a bottle). If there's one thing nearly every pizza shop across the country lacks, it's a decent selection of suds that aren't created by the Evil Empire. Just one more reason to head over to the this gem on Mayfield Rd.

Email ThisBlogThis!Share to TwitterShare to FacebookShare to Pinterest
Labels: Cleveland, East Side, Pizza